"I’m the President of the United States. I’m not the Emperor." 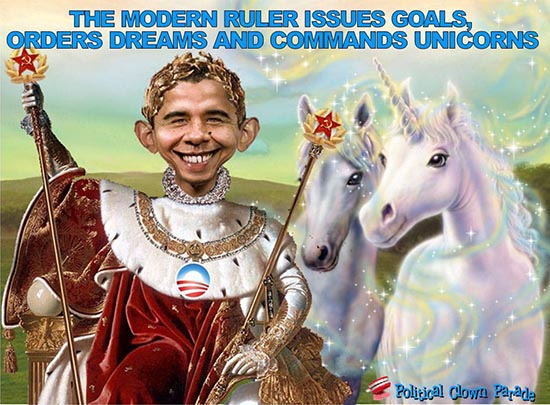 "Everyone knows how comedically droll Mark Steyn is. He’s one of my favorite writers on the Intertoobs. In his piece entitled, “Achieve Ye This Goal”, Steyn eviscerates the current occupant of the Oval Office.

It started off as a response to Peter Kirsanow’s two-paragraph post at National Review in which Kirsanow wrote:

“As if to dispel recent assertions that his ego has grown even larger since the November election, during yesterday’s Google fireside chat the president answered a question about his administration’s deportation of illegal immigrants as follows: ‘This is something I’ve struggled with throughout my presidency. I’m the president of the United States. I’m not the emperor of the United States.’”

“Jay Carney denies that at the time the president made that statement someone was standing just behind his left shoulder, holding a crown and whispering, ‘All glory is fleeting…’”

Is it just me or was that a Grade A Prime Zinger? Yes. It. Was.

Of course, when I heard that our bat-eared, abysmal, perfumed potentate had made that ridiculous statement I laughed my ass off and got to work creating a banner for this blog that was in keeping with the Black Narcissus’ impression of himself.

This guy just doesn’t grasp the roles and responsibilities of the office of the presidency......"