Middle Finger News Sevice - Reacting to almost universal condemnation of putting a picture of Bob Dylan look alike Dzhokhar Tsarnaev on it’s cover to pull the scab off the emotional wounds after the Boston Massacre, Rolling Stone editors backed off and pulled the newsstand issue and went a more popular way of appeasing the Obama crowd by featuring a cover picture of 1 year old Trayvon Martin.

The picture they chose was from the archives of Reverend Al Sharpton who claims he was Trayvon’s Godfather, and who had baptized him during an easter service while he was speaking in Miami at a memorial service for a dead Crip cut down in a daylight robbery of a Jewish owned jewelry store by a Cuban American cop wounded 4 times before returning fire at the robbers.

At the time Sharpton blamed the Jews again for opening a high end jewelry store just miles away from a neighborhood housing thousands of displaced black teen agers. “Those Jews should know better,’ Reverend Al squealed, “by putting all that bling in the window and in those glass cases they tempted our boys beyond their ability to resist the devil! ‘

Sharpton’s visit led to 3 days of rioting, the looting of 124 stores and the burning down of an entire city block catering to the needs of the African-American community. 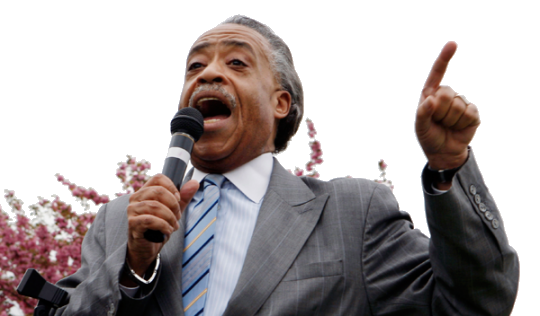 For his efforts in contributing to racial divide Sharpton has been given his own TV pulpit to inflame America, got a pass for his income tax avoidance, and been granted 501C status after a 15 second revue by the IRS muslim compliance officer.

Jesse Jackson was unavailable to comment after his universal appeal to the UN to investigate the “human rights” of thousands of black felons currently serving time for a variety of drug related and senseless crimes as he was visiting his son and daughter in law in prison for corruption, fraud, ripping off their own constituents.