'I LOVE BOOBIES' and the ACLU

Okay, we're talking Middle School here, 6th -7th and 8th graders - flowering young ladies and raging male hormones in tennis shoes. Not the halls of higher education. But the self appointed defenders of our liberties at the ACLU believe a school system cannot ban "I LOVE BOOBIES"  bracelets from campus.

I'm a stanch defender of free speech, but I also believe in decorum and appropriateness. We are talking about children for the most part, not socially aware teenagers.  And lest we forget, this is the same organization that has done more then it's share of terrorizing school systems unable to afford the cost to defend themselves over Christmas plays and student discipline..... 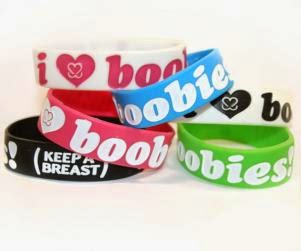 The case began a year ago when two middle school students, Brianna Hawk and Kayla Martinez, filed suit after being suspended for defying their school’s ban on the bracelets. When a lower court judge ruled in favor of the girls, the school district appealed the ruling, eventually brining the case to the 3rd U.S. Circuit Court of Appeals.

The American Civil Liberties Union represented the girls in the case. The ACLU legal team argued that students have a right to discuss important social issues, even when that discussion is prompted by bracelet slogans.

"It explicitly says school children talk about important things, and when they (do) ... that's the kind of speech we want to protect and promote," said Mary Catherine Roper, an ACLU lawyer working on the case."

Who gets to define "Important Things" these days, Ms. Roper. And what about the liberty to set rules and regulations within an organization? And where are you when speakers invited to college campuses are intimidated into canceling their appearance because of there opinions (free speech)?

I believe the ACLU could better serve the defending of our liberties (but I don't believe that is their real intention) by standing up for the civil liberties of people attacked by racist thugs on the streets, or protecting us from blatant intrusions by the government into our private lives. But then again, that's not what it's founders (or useful idiots as Stalin liked called people like them) really had in mind now did they.....
© Posted By Diogenes Sarcastica™ on 8/06/2013 08:56:00 PM