Well, at least the golf courses are still open......

'“It seems as if al-Qaeda, or its Arabian Peninsula branch, has succeeded in terrorizing the United States of America again, but this time without – as of this writing – detonating an ounce of C4. It doesn’t strike me as a wise idea to preemptively shutter 21 different American embassies across the Middle East and North Africa in response to NSA-collected terrorist chatter. What message does this post-Benghazi, “don’t say we didn’t tell you” move send to the citizens of the Middle East, who, it is our hope, understand the United States to be a powerful and fearless country dedicated to openness and to the defeat of fanaticism? We have already muddied any message of fearlessness by turning our embassies into bunkers. Now, we are admitting that these bunkers aren’t safe. What next? Virtual embassies on Facebook? Ambassadors who never leave Washington?" - Jeffrey Goldberg,  Bloomberg 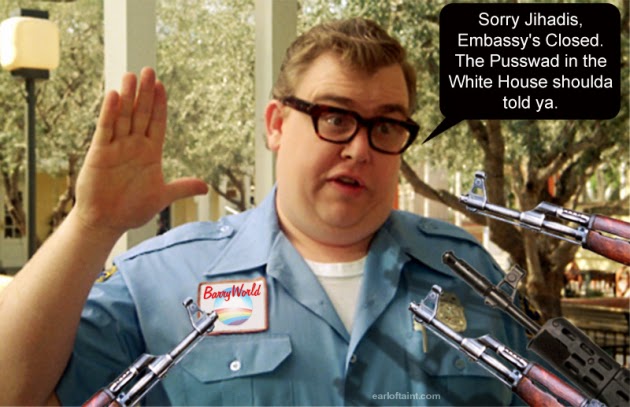 image via Earl of Taint


On Saturday, as embassies around the globe remained closed due to terror threat, and while his national security team met for emergency session, President Obama golfed for his birthday. He headed over early to Andrews Air Force Base in order to get in a round of golf before heading to Maryland’s Catoctin Mountains to Camp David.
© Posted By Diogenes Sarcastica™ on 8/06/2013 11:38:00 AM
Labels: O's House, Scandal, Second Term