MFNS - With the impending government shutdown, growing debt and a rebellious House of Representatives on his tail, the president announced today that while his administrative White House staff works feverishly to bring about new a jobs bill, he'll be single-handedly working like a laser beam on fiscal responsibility, penning his own debt reduction plan. The President says that the new bill could have our national debt completely obliterated within three years. 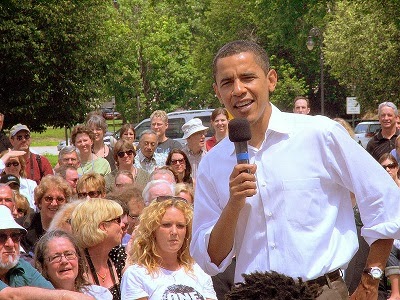 “When President Eisenhower occupied my office, the tax rate for the top bracket was 90%,” Obama explained. “We can't raise taxes these days without those right wingers throwing a conniption fit, but I think we can probably find ways of taxing those @&*%#s without them actually realizing it.”

The President's plan, which is still in its early draft phases, will create a special 60% sales tax on golf equipment, luxury vehicles (including cars, aircraft, and yachts), fillet mignon, cigars, homes costing seven figures or more, maid services, and administrative costs for anyone naming their newborn child `something that ends with III.'”

But the real ingenuity in the President's plan comes in the form of his income tax system. “I spend a lot of time around wealthy people,” President Obama said. “They may not always realize it, but they're always willing to pay more for something if they think it's special, or higher-class. So we're going to raise the income taxes for everyone earning $1 million per year or more to 70%, but tell them we're lowering their taxes to 10%.”

The President watched the confused press pool scratch their heads for a moment before continuing.

“Here's where it gets clever, are you ready for it? The other 60%? We'll tell them they're special, higher-quality taxes on very special tax forms. These special taxes forms are made in the Swiss Alps by hand from endangered Rafflesia flowers from the Amazon by the US Women's Olympic Swim Team, in the buff, with ink heated in a special diamond-encrusted gold oven, fueled by humpback whale oil, before it's thinned with rare Taiwanese squirrel monkey liver oil. The final result is ink that coke-laden supermodels use to dip their nipples in, and with that, all of the letters on the tax forms are inked.”

"These rich bastards are willing to pay $8,000 for a cigar from Mexico that's labeled as being from Cuba, then screw it, they'll over-pay for just about anything they think is uppercrust. While we're at it, maybe we'll lie and tell them that this money won't be going toward building schools, or feeding the hungry, or giving health care to poor children and senior citizens. Let's just say the added taxes go to building new golf courses. I'll bet they won't mind paying their fair share if that's the case!”
© Posted By Diogenes Sarcastica™ on 9/23/2013 08:59:00 PM