It's Always Easy to See Who They Fear the Most 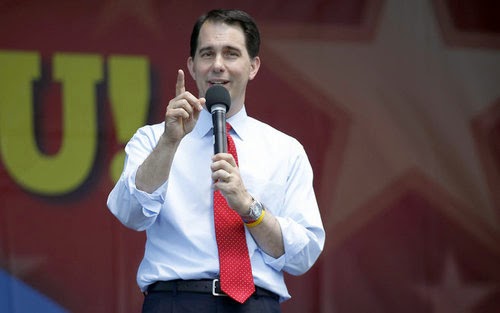 via Poor Richards News:
"Prosecutors are alleging that Governor Scott Walker and Karl Rove were part of a “criminal scheme” which coordinated illegal campaign fundraising."


"Prosecutors allege Gov. Scott Walker was at the center of an effort to illegally coordinate fundraising among conservative groups to help his campaign and those of Republican state senators fend off recall elections during 2011 and ‘12, according to documents unsealed Thursday. In the documents, prosecutors lay out what they call an extensive “criminal scheme” to bypass state election laws by Walker, his campaign and two top Republican political operatives — R.J. Johnson and Deborah Jordahl. The governor and his close confidants helped raise money and control spending through 12 conservative groups during the recall elections, according to the prosecutors’ filings.

The documents include an excerpt from an email in which Walker tells Karl Rove, former top adviser to President George W. Bush, that Johnson would lead the coordination campaign. Johnson is also Walker’s longtime campaign strategist and the chief adviser to Wisconsin Club for Growth, a conservative group active in the recall elections."

"It’s hard to say at this point how big of a scandal this really is. Often times, my first reaction to anyone being charged with a crime is: “Now, why is that illegal again?” Campaign finance law is generally one of those issues for me. I truly believe that anyone should be able to give whatever they want to whomever they want. No questions asked. It’s called liberty."