"With its carefully collated facts and figures, it reads like a set of company accounts.But closer inspection of the 400-page document reveals it is a chilling breakdown of the murderous activities of the fanatics battling for control of Iraq.

For this is the 'annual report' of the Al Qaeda-inspired Islamic State of Iraq and Syria (ISIS), designed to demonstrate its power and attract funds from potential donors. Like any corporate document, it uses computer-generated graphics, details a management strategy, lists performance and targets." 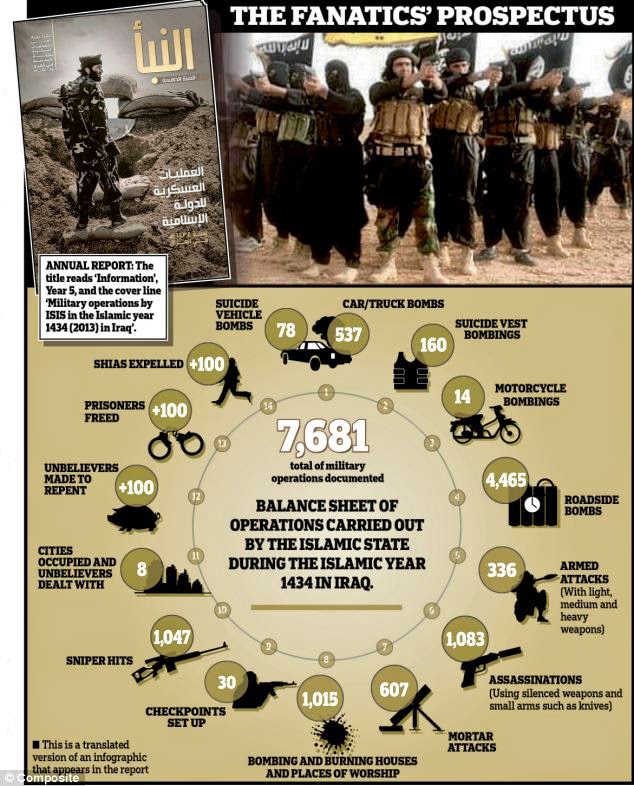 "The report, written in Arabic with a photograph of an ISIS gunman on its cover, has been analysed by the US think-tank, the Institute for the Study of War (ISW), which has corroborated much of the information. John Lawrence, of the Washington-based institute said: 'These numbers are not just purely propaganda figures.'

ISIS even records the number of people who renounced Islam then repented – and contains one sickening category headed 'apostates run over."

Maybe this will give Commander Zero a reason to turn the Flyboys loose with a few cruise missiles and 2000 pounders on these worthless animals - possible pirated Photoshop and Microsoft software.