Customers shopping online for various items of interest, or just simply looking for something to be offended by, found the latter in the Halloween section of the retailer's website. Nestled among the typical witch and superhero costumes for kids was a costume of a different kind that Arabs found to be in extremely poor taste.

It's beyond me who would want to dress up as an Arab Sheik or Achmed the mad bomber, but it freakin Halloween. It's a big holiday for kids and extrovert adults who never grew up to get out of themselves for a while. 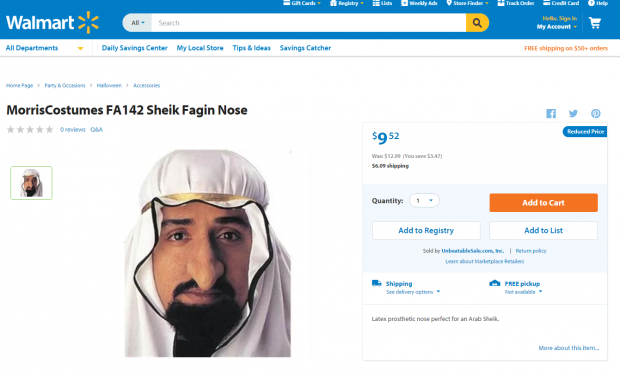 At some point Muslims must realize that the world doesn’t revolve around them and their inherent hate for anyone and everyone who aren’t followers of Islam. Stores can and should sell whatever they want, whether it offends them or not. Now, only time will tell how Walmart reacts to the insistence that their merchandise is offensive, whether they bow down to a culture that incessantly complains, or cater to the people who shop in their stores and made them a success.