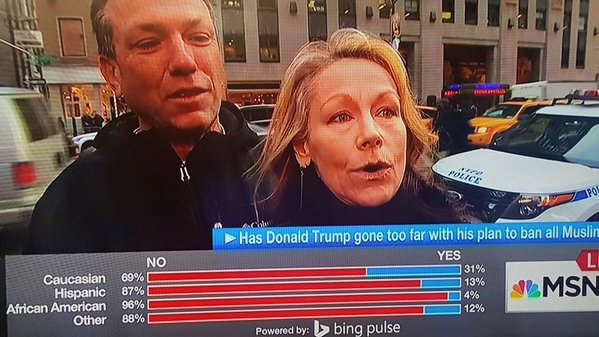 CCC -The media keeps telling us that Trump's  immigration stance is “racist”.  Yet poll after poll show that some non-whites support his views on immigration even more than white people.

When asked if Trump went to far when he called for a temporary ban on Muslim immigration, 87% of Latinos, 88% of “other,” and 96% of blacks answered “no.”  Among white people, 69% answered “no.” Overall, 76% of Americans answered “no.” Trump’s overall support has increased since making the comments.

Black Americans are opposed to immigration at even higher percentages than white Americans. Despite being called “racist” in the media, Trump may very well have the largest amount of black support of any Republican presidential candidate in over twenty years.  It sounds to me like Trump is just advocating mainstream views.

The lefties are beside themselves......

The far-left Southern Poverty Law Center released a statement saying Trump’s comment on Muslim immigration are “mainstreaming of hate and extremism.” Gee, what a surprise.