Never Get Between a Cop and His Donuts... 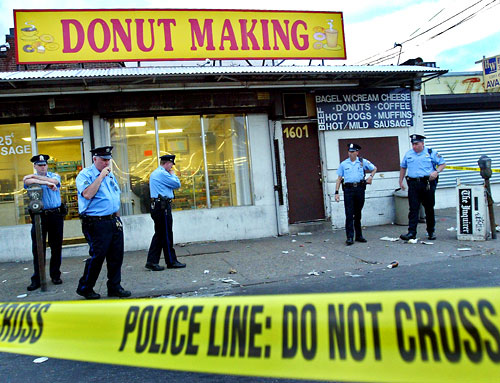 Philadelphia, Pa — An ex-transit cop has been found guilty of false imprisonment and official oppression stemming from a Christmas Day incident when he stepped on a woman's foot and refused to apologize after cutting in line at Dunkin’ Donuts in 2013. When the woman attempted to alert the officer's superiors, he slammed her head into an ATM machine, and placed her under arrest.

Douglas Ioven, a former officer with the Southeastern Pennsylvania Transit Authority (SEPTA), cut in line in front of Muibat Williamson, a nurse at Einstein Medical Center, who was on her way home from a night shift. When Ioven was leaving, with coffee and doughnuts in hand, he stepped on Williamson’s foot.

In testimony about the 2013 row, reported philly.com, Williamson said she confronted the officer and demanded he apologize,  but Ioven refused. An argument ensued, and an unnamed witness said she even inserted herself between the pair to remind them of the holiday. She overheard Ioven tell Williamson,

During two days of testimony last week, a retired SEPTA police sergeant told the jury that, after the incident, Ioven told him,

"I think I screwed up because I thought she was a homeless person, but she was a regular person. "

So much for the City of Brotherly Love.