Finally: Something Moochell Obama and I Agree On.

The last time we heard from Michelle Obama she was bragging about how sexy she thought she was. In a stunning reversal, the First Lady now says she feels uncomfortable looking at herself on TV, indicating that maybe she doesn’t think she’s terribly attractive.

Join the club Mo! It only took you seven and half years, but you finally realized that you're unpleasant to the eyes and ears of all Americans.

“My bottom teeth stick out a little bit. And if I had had braces, they would be fixed by now. So for all of you who don’t like your braces, you will appreciate it when you’re my age.” 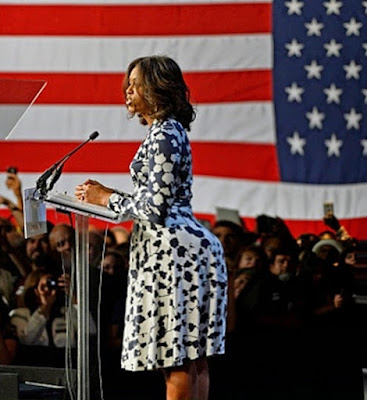 Man, she is way off on what makes her so hard to look at. It ain’t her bottom teeth, though they are kind of funky, but rather the whole package.

However, as soon as her semi-honest assessment arrived, it disappeared into the classic Obama lack of self-awareness. She was asked what her plans are when she and her husband mercifully leave the White House:

“Sometimes I like to travel when I’m not too tired, and you know what, the president and I, we might just take a vacation … we might just do nothing for a second.”

Traveling, taking vacations, and doing nothing on the taxpayer’s dime is all the Obamas have done since they got to Washington. How is it even possible to do less than what the Obamas have done, or more correctly not done? Plus, it’s going to be a lot harder to vacay when the American people aren’t footing the bill. A community organizer’s salary doesn’t pay for five-star accommodations. 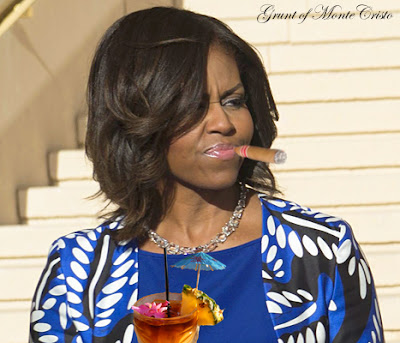 From a privileged black family, she has no idea what the real world is like. Living it up on our tax dollars, Moochell is having a great time traveling the world in luxury while we watch our standard of living decline. And with the size of that ass she has never missed a meal no doubt.

First, her skin color kept her back, then her gender was a hurdle to cross, and her sex appeal almost stood between her and success.

Butt Michelle has finally realized what the rest of us have known along:  She's Monkey Butt Ugly. Hopefully she finally shows some respect to the country and keeps her ugly mug and her clown wardrobe off of TV for the remainder of her husband’s final days in office.
© Posted By Diogenes Sarcastica™ on 4/21/2016 06:42:00 PM