There Goes the Neighborhood - The Obamas Are Staying in D.C. After the President Leaves Office. 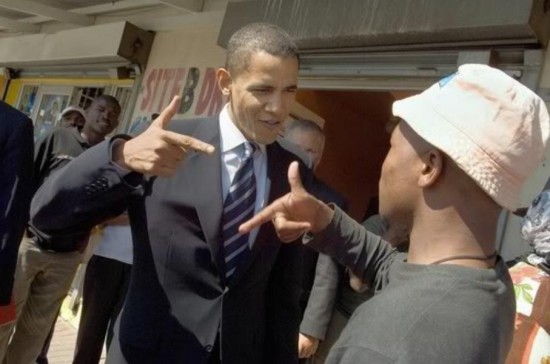 The worlds most famous Community Organizer and the First Lug have reportedly decided to stay in the nation's capital for at least two more years. They've decided to lease a 8,200-square-foot mansion in DC’s  Kalorama neighborhood after they leave the White House next January. The eight-bedroom, nine-and-a-half-bathroom residence is owned by Joe Lockhart, the NFL’s executive vice president for communications.

"As far as legacies go, the thought of President of Hope and Change moving to one of the oldest, most established, filthy-richest neighborhoods in the city just doesn’t jibe. It’s hard to imagine the Obama of eight years ago deciding to forgo the potential to move to a revitalizing area, or just a slightly less hoity one, in favor of a zip code where the blood runs royal blue and the servants stairs are still used by the help. It feels bizarrely out of a character for a man who proclaimed “We didn’t become the most prosperous country in the world just by rewarding greed,” to settle down on a block where a 4-bedroom home averages about $2.8 million."

No more Chicago ghetto organizing for Bo. No Sir. They say they will stay while rented offspring daughter Sasha finishes up at the elitist Sidwell Friends School (one of those private schools liberals don't want you to be able to send your kids). And you know what that means? He'll remain close to the action, in range of the political reporters and the DC news bureaus, ready to show his mug and give his views on the countries affairs as an elder statesman. And watch for him to make one last feeble attempt at a legacy by taking the forefront in a push for DC Statehood.  Even worse, there's still Michelle.


So, the Obama's will continue to embarrassing the country, pretending as if the actually have any class to speak of and movin' on up to a elitist neighborhood.

The country is tired of Barry and Michelle putting on airs, putin' his feet on the desk, letting their dogs sit on the good furniture and not eating mac n’ cheese and wieners for Valentine’s Day like normal Americans? And why can’t you be more like Bill Clinton? At least he moved his office and some of his stuff he didn't care got stolen to Harlem.

We were all really hopin' you'd drag Bigfoot off to Hawaii and STFU while we get on with the business of cleaned up the mess you made Gayin' Up America the last eight years. But we can only dream.......
© Posted By Diogenes Sarcastica™ on 5/26/2016 12:00:00 AM