To Liberals, Diversity Has Become Just Another Affirmative Action Program

Diversity is a thread that runs deep in the makeup of America. People of all colors and backgrounds have been given the opportunity thrive, to become successful and prosper. But like everything they clutch, liberals now insist on turning our natural self propelled natural diversity into a Affirmative Action Program.


CNN Host Called For U.S. Flag Bearer at Olympics
to Step Aside for Muslim Fencer

PJM - The host of the CNN show "United Shades of America" called on Olympic champion swimmer Michael Phelps, the most decorated Olympian of all time, to forgo the honor of carrying the American flag at the head of the American delegation and allow a Muslim female fencer to carry it instead.

Kamau Bell penned a column on the CNN website saying that Phelps should withdraw in the name of "diversity."

“What I’m trying to say is that as far as America is concerned, you are a golden boy … literally. You getting the opportunity to carry the flag is like Michael Jordan getting a free pair of Nike sneakers.

You are both the living embodiment of the “honor” you are getting.

To put it another way, in the Make-Your-Own-Ice-Cream-Sundae-Bar of life, your sundae is lousy with hot fudge, butterscotch, strawberry sauce, whipped cream, nuts, sprinkles, extra scoops of ice cream, and so many Maraschino cherries that 5-year-old kids with mouthfuls of Maraschino cherries yell as you pass by, “THAT’S TOO MANY CHERRIES!”

And that’s why I would be proud of you for giving up your position to Ibtihaj Muhammad. Muhammad carrying the flag would be much bigger than your one moment. 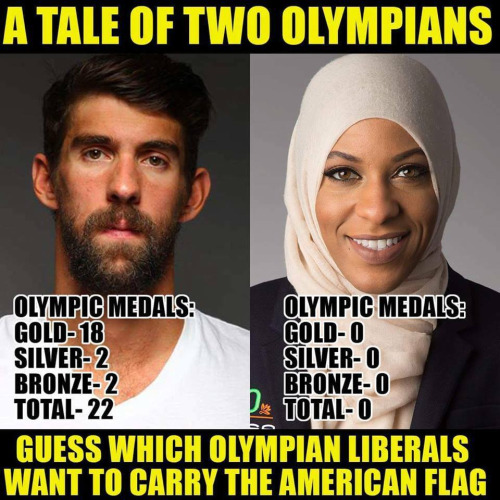 It would be a symbol for our country in this moment when we are mostly known for one of the most contentious, controversial, scandal-ridden, hateful, xenophobic, jingoistic, and just generally unlikeable presidential elections in recent memory. This is at a time when we could use some more symbols of unity and togetherness.

Muhammad carrying the flag would be nearly a one-stop inclusion shop. Muhammad is an African-American, hijab-wearing Muslim woman who is also a world class fencer. Those are all groups that could always use some more love, acceptance, and respect from this country. (And yes, I'm including fencers in this group.)

If (when) Muhammad carries the flag, that moment (and Muhammad herself) would grow into legend. We're talking bigger than just the Olympics.

Trying to unravel the skein of idiocy that runs through the entire article is a task for which I'm not suited.

But how much fun would that be?
© Posted By Diogenes Sarcastica™ on 8/08/2016 03:00:00 PM
Labels: Culture, Decay, Ground Zero for Crazy, Liberal Hypocrisy
Newer Post Older Post Home