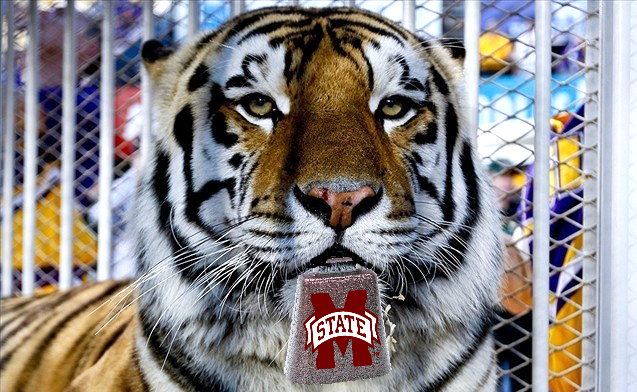 Saturday, Mississippi St. travels to Tiger Stadium with their #@%& cowbells for the 110th meeting between the Bulldogs and the Tigers. Mike has plans to add to his every increasing cowbell collection again this year.

Being this years "Gold Game", LSU will dress out in retro uniforms of white numbered helmets, gold jerseys with purple stripes and white pants, a throwback to the uniforms of the 40's and 50's,  last regularly worn in the 1958 National Championship game. 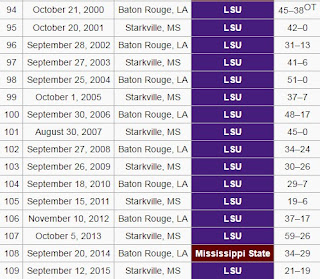 Since 2000, or the beginning of what some not so affectionately have come to call "The Saban Era" of Southern football, the Tigers have dominated the Bulldogs.

While the Tigers are again favored, with the Bulldogs new QB, Nick Fitzgerald, who had a team record breaking game last week against South Carolina, this should be another good test of how far along the Tiger defense, who has only given up two touchdowns, has come so far. If they can contain the highly mobile Fitzgerald, they can solve their most glaring problem, time of possession.  This is a game the Tigers should win, but the offense will have to be on their game to win it.
I say Tigers by 10+  ✔

And this is why the Good Lord put a great river between the states of Louisiana and Mississippi!

Hey Stingray, you bloated inbred Mississippi redneck, y'all got your ass kicked by an FCS team, and the team you did beat was a bottom tier SEC East team, South Carolina....SOUTH CAROLINA!  Hardly makes you a powerhouse there Fatso. And let's see....your Chihuahuas have lost 22 of the last 24 to the Tigers. PHFFT!  Match Les Miles 113-32 record and then you can throw some shade. BTW, your cat acts awfully gay and your momma wants her video camera back..... 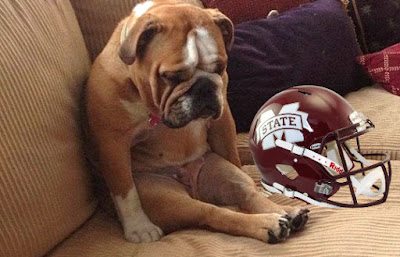 #1 Alabama @ #19 Ole Miss
This is all that needs to be said about the SEC Game of the Week:
Ole Miss has taken the last two contest between the teams and last year spoiled what should have been a perfect season for the Tide. No one in there right mind would want to be a Crimson Tide player on the ride home if they were to lose three in a row......
Nick Saban gets his revenge in Oxford - Tide by 12  ✔

#17 Texas A&M @ Auburn
I'm still not convinced the Agricultural and Mechanical Dudes of Texas are as good as they appear. "But Diogenes, they have Trevor Knight and you know a little bit about John Cheaves' defenses" you say. And yes, you would be correct. But they play at Auburn, and this is the SEC. But, if A&M is for real, they could very well be a conference contender.
I say Auburn in an Upset by 2  ✖
Elsewhere:  #10 Louisville Jumps #2 Florida St.   ✔