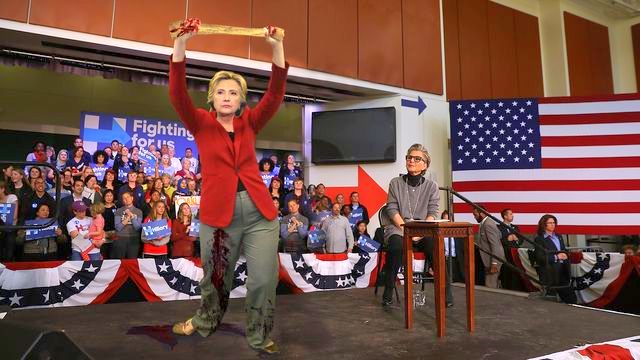 Hillary Returns to the Campaign Trail

Middle Finger News Wire - Hillary Clinton has staved off countless rumors about her health in the past month, and the bout of pneumonia that forced her to leave a 9/11 memorial event this weekend only compounded people’s concerns. The Democratic candidate had no choice but to address the matter, and she just did it in a big way:

At a campaign event this morning,  speaking in front of thousands tens of assembled members of the press and supporters, Clinton unquestionably debunked comments about the fragility of her health by assuring her audience she was on strong prescribed medications for her temporary condition, and then proceeded to tear open her thigh and wrench out her femur. Immediately after freeing it from her leg, Clinton began to aggressively smash the femur against the speaker’s podium to demonstrate its vitality.

Okay, so this is pretty much a masters course on how to take control of a story!  Clinton went on to say as she proudly held her leg bone high above her head:


"I welcome any man or woman who believes they possess the strength to shatter this femur to join me here on stage and try, though they will most certainly fail.

Let it be known that my femur is more robust than a thousand oxen and as unbreakable as my determination to lead this nation as its first female president."

Only a politician like her could take a potentially detrimental controversy and turn it into an opportunity to show exactly how ready she is for the Oval Office.

And here is our friend Springer's take on Hillary's return to the Campaign Trail... 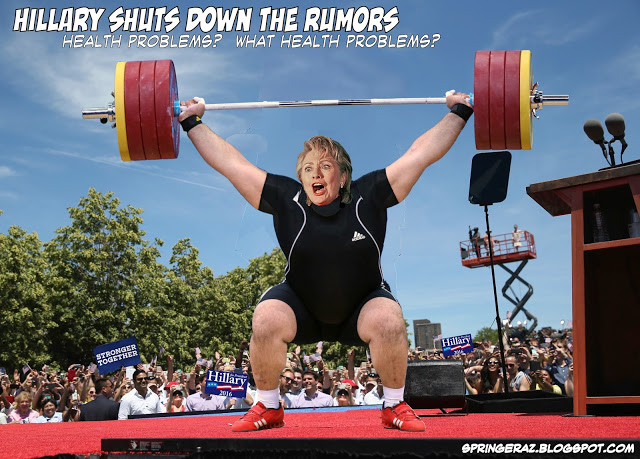