Saturday morning kicks off a day of football sure to have a game for everyone who enjoys college football. The newly crowned Heisman winner takes to the field, and the National Championship Game participants will to be decided are just two of the examples of what is in-store for this weekend. 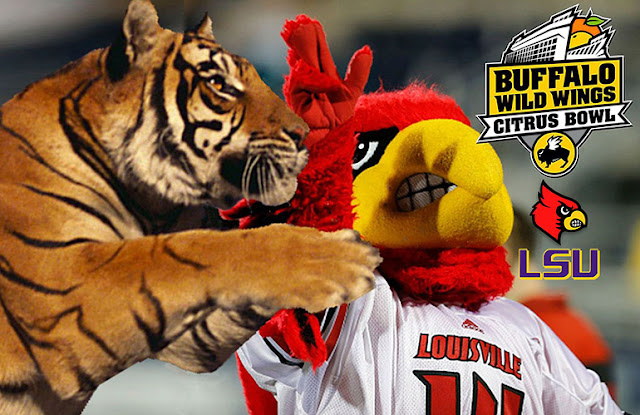 The Citrus Bowl - Orlando Fla.
(CBS 10 am)
Louisville vs. LSU

Saturday at 10 am kicks off new years weekend with the Citrus Bowl: The ACC Louisville Cardinals and the LSU Tigers of the SEC.  This will be the 6th time in 10 seasons the Tigers have faced a Heisman winner, but this years Citrus bowl has eerie similarities to a another bowl game..

This year the trophy is not as valuable, but the same swagger is evident. The newly crown Heisman King, a very dangerous Lamar Jackson, and the Cards started the year out as a steamroller, only to lose their last two games to end the year. The cardinals have averaged 461 yds. a game this year.  The Tigers stingy defense, who will be out to prove their steel, will have their hands full for sure.

In the Cards favor is naturally the most explosive player in college football right now. In the Tigers' favor is the #5 ranked overall Defense in the nation , and the fact Louisville has given up 13 turnover in the last three games. I expect big plays from both sides, but if the Tigers can keep Jackson from running to the outside and contain him to the middle, they have a better then good chance of winning.  My only worry is the Tiger defense will again be without LB Kendall Beckwith in the middle. His absence was glaringly apparent in the last game of the season at A&M.  Up until that point the Tigers had led the nation in fewest TD's allowed.

The sports monkeys are calling it a toss-up....... GEAUX TIGERS!

As they say; Be careful what ya wish for! Not long ago Washington Huskies fans, high from their Pac 12 Championship game win held up signs for the national audience to see proclaiming 'WE WANT BAMA'.  And just like a ol' dog chasing a car, once you catch it, ya gotta deal with it.

So, now what ya gonna do?

Not to take anything away from the Huskies excellent QB Jake Browning, who we will most likely see slinging balls on Sunday one day, but guys, you do realize Alabama hasn't lost a game since Oct 2015?!  Boys, boys......

But keep you chins up Huskies, I fear you're about to receive the same treatment all good teams get from the Crimson Tide. They will play football with you for 20 minutes or so, then punch you right in the face just to remind you who you're dealing with. Then at halftime make their adjustments, then come out and wear your ass out!

You see, this may not be the most explosive or flashiest Crimson Tide team Nick Saban has fielded. But as has come to many peoples realization is, this may be the best team he has every put on a field! And like a train barreling toward it's appointed destination, and unfortunately as many who came before you, are standing on the tracks. But you can take solace that you were part of football history, and beaten by the best.

And after January 9th we will no longer be asking that question: "Is Nick Saban the Best to ever coach College football?"

I'm sorry, I have never believed Ohio St was a #2 team or as good as the big10 Ra-Ra sports monkeys said they are. Look at their schedule.  They are a young team to be reckoned with.

At the same time, I think Clemson has been inconsistent, but underestimated. That's what makes this a hard game to perceive. All in all, I have to go with a proven Deshaun Watson's play making to pick them a winner.  It will set up a rematch for the NC.

The Steak Bowl -  Florida vs Iowa.
Iowa by 6

The Cotton Bowl - Eastern Mich vs Wisconsin.
Badgers by 10