With the election of Barky Obama, minorities in America came to falsely believe they were finally running things in America. With the election of Donald Trump, they now believe America has taken a step back into the 19th century. Denial of free speech to anyone who disagrees with them somehow seems right. But as we have seen, as more minorities combine into a majority, they themselves are taking on the the very cloak and mindset of oppression.

America, and all it stands for is under attack by the least oppressed people in the world. Whites are being taught to be self loathing and join with people who can only identify themselves by their sexual orientation, ethnicity or skin color. Feeling over Freedom and the Law. Classic Western Liberalism that has freed Millions is under attack. Modern Progressivism is on the verge of becoming Regressive-ism. Case in point:

A rambling screed posted to the Daily Californian by a UC Berkeley student on Monday declared that the First Amendment right to free speech is nothing more than a tactic used by the state to preserve white supremacy. What should matter more, argued Juniperangelica Xiomara Cordova-Goff, a student senator at UC Berkeley, are the feelings of so-called marginalized students. (by marginalized he she means non-whites)


"I am over the debate on this campus between UC Berkeley conservatives and those on the left who still have energy to argue. Free speech has always been a tactic used by the state to grant the illusion that all voices in this nation are valued, yet there is a reason why Black female senators are discredited and why there is a white supremacist in the Oval Office. Somewhere in all our political discourse, we lost the point. We forgot that the people, the victims, the survivors of state violence we casually discuss are people living the experiences we have the privilege of discussing from a theoretical, omniscient perspective." 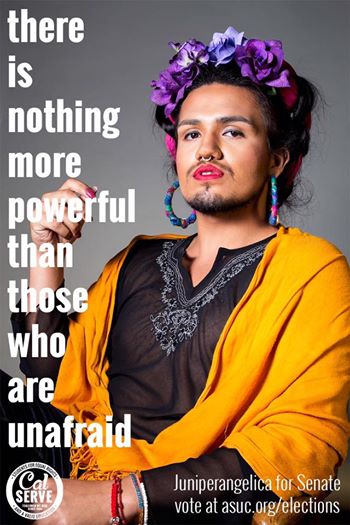 "On the morning students woke up to Sproul Plaza flooded with fully armed police officers last Thursday, I was shocked and traumatized. I want to say that I do not feel safe on this campus. Living on the streets for six years did not prepare me for the violence of UC Berkeley. We cannot let free speech become a tactic that asks oppressed people to tolerate their oppressors in hopes of peaceful compromise. I guess I am just at the point where I’ve studied the genocide of my people and am tired of living it today. I do not understand how we can fill the streets demanding justice and then magically separate ourselves from the movement to protect conservative voices who want a soapbox and our death certificates. This has done nothing more than maintain the white supremacist, capitalistic and patriarchal nature that allowed colonizers to protect their power centuries ago and that has allowed their descendants to elect an openly racist, queerphobic, Islamophobic/xenophobic and anti-poverty adminstration"

I hope you are as enlighten as I am to know a confused nose-ring, dress wearing bearded Mexican man who thinks he's a woman straighten out the hard working tax paying American about their awful right to free speech they have fought and died to protect is used to degrade them as White Supremacist!  The writer is very ignorant of recent history to think that this article would not be censored and banned in many places if it weren't for the strong tradition of free speech and the legal protections for free speech - which she is trying to destroy.

Oh delicate children, we of the real world urge you to stay in school and get a whole bunch of degrees because life outside those ivory tower walls is a F**KING CONTACT SPORT, KIDDIES.