For the First Time Since November, The Word That Does Not Appear on the Front-page at CNN: Russia.

The Narrative has Changed 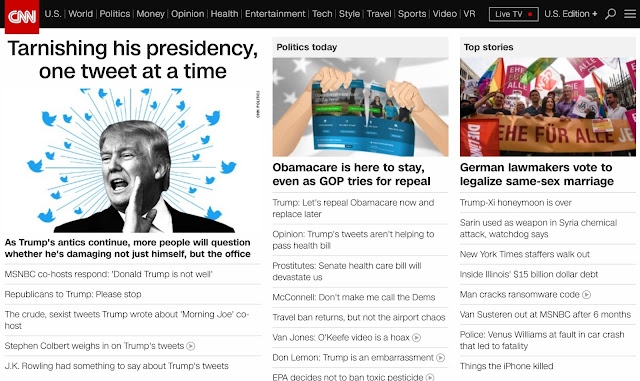 
Althouse - "I do see — look closely — "Van Jones: O'Keefe video is a hoax." The video is the one where we hear Van Jones say "That Russia thing is just a big nothing-burger." But the teaser on the front page doesn't give us a clue that the video had to do with Russia, and even when you click through, there's no mention of the substance of what we hear Jones say in the video, just the assertion: "CNN's Van Jones says the ambush video of him done by notorious provocateur James O'Keefe is a hoax."

And how is the video a hoax? I think Jones is misusing the word, because he does not deny that he is the man in the video or that there's some context that would change the meaning of his statement. He indicates that he could have said other things, but not that he did actually on that occasion say more and O'Keefe had it edited out......."  - READ MORE
© Posted By Diogenes Sarcastica™ on 6/30/2017 02:32:00 PM
Newer Post Older Post Home