Alright Boys and Girls, It's On! Time To Play Some Football

This weekend officially kicksoff the 2017 college football season. The professional  sports monkeys on high have made their pronouncements; they have awarded the Heisman Trophy, crowned the Conference Champions, picked the 4 playoff teams and proclaimed the Bucknutts of Ohio will win the NC, and go on to lose to the Patriots in overtime in the Superbowl. And as more often then not, they will be wrong.  I'll reserve any further comments on that because I kinda-sorta promised an OSU grad friend I wouldn't make fun of their team here again this year, like OSU having a strength of schedule that doesn't even rank in the top 50 of major college teams. ;)  So here we go....... 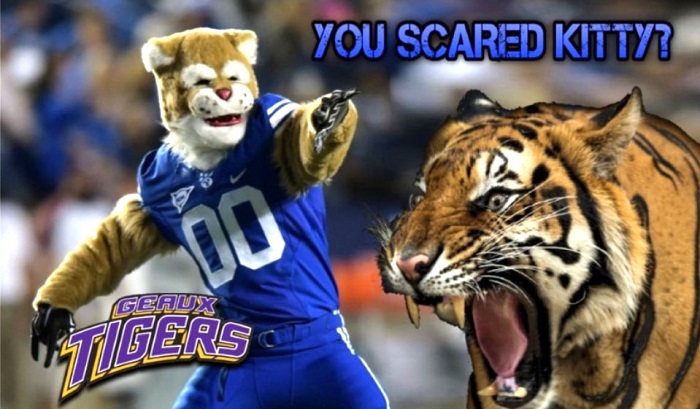 The Battle of the Cats - BYU v LSU 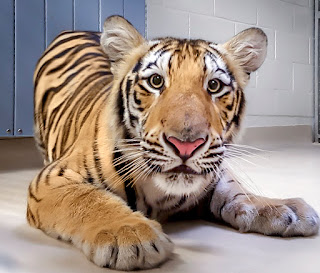 But first things first: Harvey the Tiger Cub passed all his entrance exams, and on the first day of fall classes Harvey joined the freshman class and officially named Mike VII.

Harvey's predecessor came to campus in the fall of 2007 as a 2 year old and promptly rallied the Tigers to a National Championship that year. Harvey is but an 11 month old cub who is yet to grow into his paws, so we are giving him a year before we expect any such magic from his presence. ;)

And one more first things first: because of important project deadlines due during this years football season, my SEC Sister and fellow blogger, Curmudgeon of Political Clown Parade has kindly offered to work her magic and do some of her excellent Game Day Graphics for these post to save me time. If you are a new reader of this blog, I encourage you go by and check out Curmudgeon's rousing Alabama game day post as well, as we both run headlong towards our annual, much anticipated friendly trash talk week in November when the Tigers and the Crimson Tide face-off in Tuscaloosa on 11/4.

The Tigers kickoff 2017 Saturday Night against the 1-0 BYU Cougars at the New Orleans Superdome. This will be the first ever meeting of the two teams. The Cougs finished last year 9-4 and handily defeated Portland State in their opener last week. BYU has a QB who can sling it, and should be a good test of the Tiger D backfield. They have a lot of returning starters on defense and are not to be taken lightly, as they have a very good history against SEC teams.

As for the 2017 Tigers? I'm like most; cautiously optimistic but encouraged from what I've heard from friends in the Baton Rouge media, and gleeful there is no hype around the Tigers this year. It's fell elsewhere in the SEC. The 2016 Tigers finished the year AP ranked a respectable #13, ahead of 12 other teams with better records, and start 2017 at the same position.

With the addition of Matt Canada as the Tiger Offensive coordinator the Tigers will have a much different look. Canada likes to play a spread offense, with lots of motion, shifts and misdirection.  Gone are the days of 3 yds and a cloud of dust. Expect the Tigers to still be primarily a running team, with a potential Heisman candidate in the backfield it's to be expected. The concern seems to be the depth of offensive line. Injures could be a major setback for the Tigers late in the year.  Expect Dave Aranda's Defense to be, maybe not top 5 as they proved to be last year, but stout and continue as they did last year to improve game by game.

The biggest question is can the Tigers endure their meat grinder of a schedule of late Oct. and November? We will see. I say there is an even chance Auburn and LSU could meet at Tiger Stadium on Oct 4th both undefeated, with both yet to face Alabama.

Blessfully, gone are the Les Miles years,
and it is now Officially The Coach O' Show. 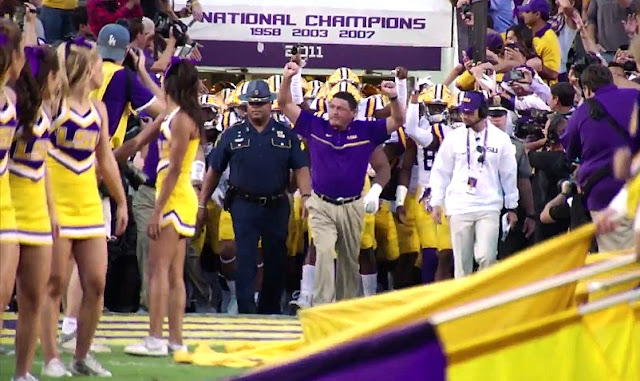