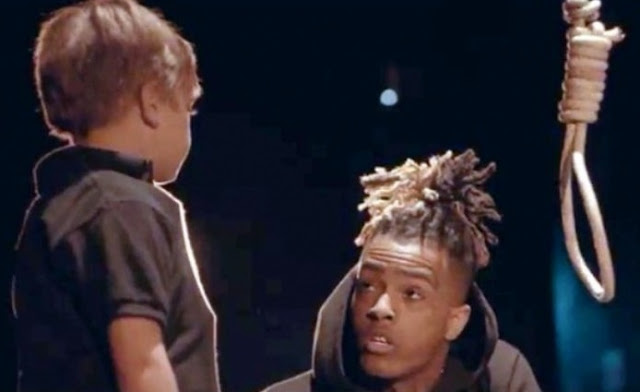 Seems this scumbag and talent challenged rapper named XXXTentacion whose latest music video (I use that term lightly) is very disturbing to say the least, has had a problem with white people for a while now. According to the Black Entertainment Network (BET) the leading experts on Negroism, he's not a very nice person.....


"Over the past year, Florida newcomer XXXTentacion has made headlines for his problematic rise to fame. From his troubling legal situation and violent past the rapper has easily made himself a target for controversy. More recently, disturbing new details have emerged regarding his alleged abuse of his pregnant white ex-girlfriend."

"Last October XXXTentacion was charged with aggravated battery of a pregnant woman, false imprisonment, domestic battery by strangulation, and witness-tampering. If convicted at trial this coming fall, the 19-year-old faces a potentially lengthy prison sentence. In Pitchfork-obtained excerpts from the alleged victim’s 142-page testimony, the Florida rapper is accused of frequent and extensive abuse."

"According to the testimony, XXXTentacion—whose real name is Jahseh Onfroy—and the alleged victim began “cohabitating” at a residence in North Miami in May 2016. Approximately two weeks later, Jahseh allegedly physically abuse the the pregnant victim and damaged her iPhone for complimenting a male friend’s jewelry. That same day, Jahseh made the victim choose between “a barbecue pitchfork and a barbecue cleaner” being put inside her vagina."

Now I don't know if this is just another example of the Low-IQ, de-evolving, violent black male feral Trevon types that are populating our major cities, or it's just another kid raised on, and black culture is actively perpetuating, the racial hatred of whites.  Either way, I hope this douche bag goes to jail for a long time, and someone makes him their personal Bitch. Better than that, I think he should be parachuted out of a plane over the afghan mountains with just a snickers bar, a pistol and one bullet and let the chips fall where they may.......