The Silence of the Cowbells 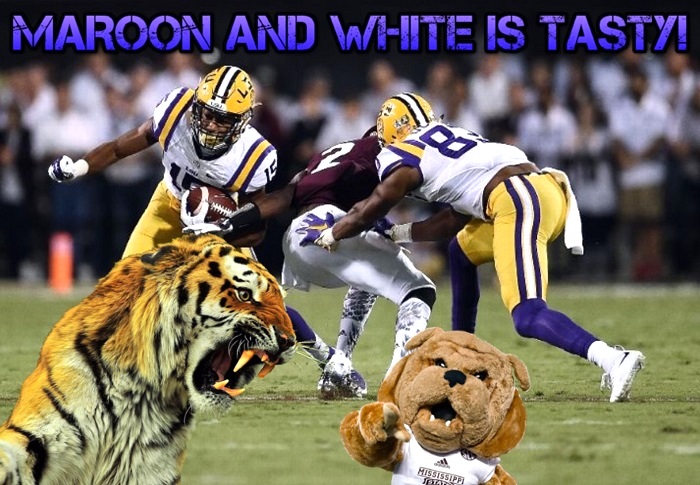 There's an ol' Cajun sayin' on this side of the Mississippi River: "The Good Lord done put a wide river between Louisiana and Mississippi for a good reason."  Who knew She was a college football fan? Last year three different groups of rowdy Mississippi boys were invited to come across the river to play. They were told NOT to throw the ball around in the Tiger house. You don't do that. But being Mississippi boys they just had to tried it anyway. The Tiger promptly spanked all three and then ate em. 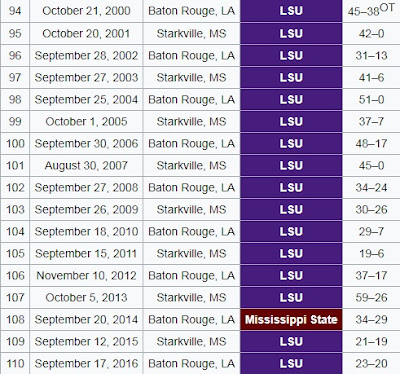 It again gets real Saturday night when it's the Tigers turn to travel across the river to Starkville Miss. to meet the MSU Bulldogs for the 111th time. Both 2-0, this will be the first real test of the teams this year.

The Tigers have pretty much owned the Dawgs and their cowbells, losing only 2 out of the last 25 contest, the last a close loss to Dak Presscott in 2014. Last year QB Nick Fitzgerald was benched in the 3rd Quarter after being brutalized by an overpowering Tiger defense he couldn't throw against.

But this is another year and Fitz has a season of experience under his belt. He and the Dawgs looked strong last week against La. Tech.  But LSU is not La. Tech, who's defensive line is more the size of the MSU field goal kicker.  And the Tiger defense is younger, not as big, but said to be faster then last year, so containing Fitz and not let him run around and break free is the key to a Tiger win. And I'm sure Matt Canada has not shown his real offensive hand yet, and probable won't until it becomes necessary.

While the Dawg's pin is but half the size of Tiger Stadium, it's still one of the toughest places for an SEC opponent to play because of the fan base, and especially their G** D*** cowbells! I think this could be a close game with good defensive play by both teams, and big plays will probable make the difference. Let's hope freshman mistakes that have plagued the Tigers first half play this year don't penalize the Tigers into a Loss. 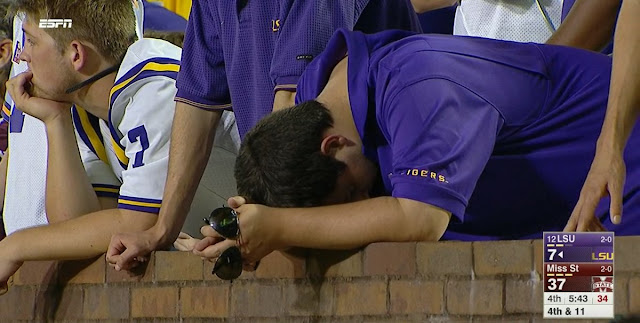 Florida (0-1) vs Tennessee (2-0)- 2:30PM CT - CBS
The Squirrel and his Gators host the Volunteers in Gainsville Saturday in the SEC rivalry game of the week.  After last years epic win over the Gators and Butch and the Boys with Big Mo on their side, if the squirrel hasn't found an offense and loses this week, this will blow the SEC East wide open. I said the Vols were gonna spoil some peoples season this year, and I think this week is gonna be just the beginning.....


South Carolina (2-0) vs Kentucky (2-0) - 6:30PM CT- SECN
The Sports Monkeys say both these teams are on the rise (and lord knows the SEC east needs that) as both have recruited well recently. I picked the Kats to be the other major spoiler this season, and I'm really tempted to pick them for a W, but I don't think this is their week. The Gamecocks are favored and the Kats may give them a scare, but not strong enough to take them down.

After correctly picking the upset of the Ohio St. Bucknutts, along with 4 of 5 SEC games last week, Diogenes is 5-1 going into week 3.