The Orange Guys vs The Cats 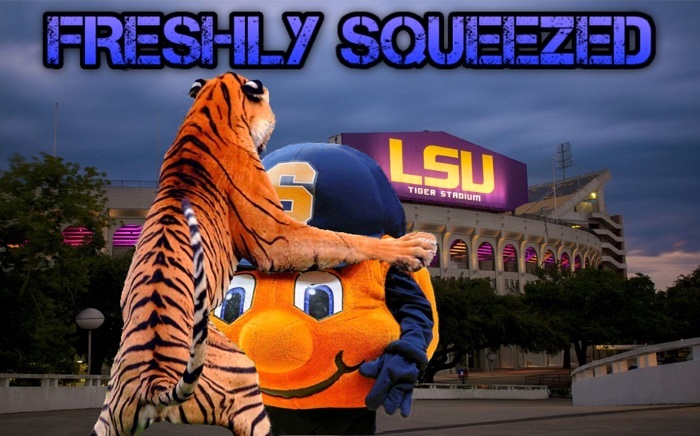 After the worst defeat in the 111 year history of the Miss. St vs LSU football, some impatient LSU faithful and many of the professional sports monkey media are saying the sky is falling.  I'm not one of them.  Some have totally lost sight of the fact the Tigers are a very young team, with 20 freshmen in the rotation on both side of the ball. Mistakes are going to be made and losses not to be totally unexpected. I sensed something wasn't right Saturday night from the very beginning, from the shoving at the coin toss to the targeting ejections by veteran players. I said preseason I was cautiously optimistic, and it's still early season yet. And as many Alabama fans will tell you, one game does not make a season. Last week is in the books and hopefully a wakeup call, and Coach O' fixed what ever was wrong last week.

Saturday night the Tigers welcome the ACC Syracuse Orangemen to Tiger stadium. The teams last played in 2015 with the Tigers walking away with a 34-24 win.  I have already well stated my utter disdain for the color orange..........especially within a sea of Purple and gold. Tigers get back on track.

Alabama vs Vanderbilt - 2:30PM CT- CBS
I think this may be one of the toughest first half games Alabama will face all year. Vandy has the fire, is playing at home and is gonna go for a kill. Don't be surprised if it's a low scoring close game. But in the end Alabama wears them down in the 4th and walks away.

Florida vs Kentucky - 6:30PM CT- SECN
The Squirrel and his Gators got lucky last week, but it's short lived luck. They ain't playing in the Swamp and Kentucky knows where the end zones are......

Miss. St vs Georgia - 6PM CT - ESPN
I'm not ready to buy Miss. St. stock just yet. They beat Georgia at home I'm in. Not Till Then. LSU was not a #12 team, I think Georgia is. Playing in Athens gives The Dogs the big edge.


Texas A&M  vs Arkansas - 11:00AM CT ESPN
The Hogs and the Aggies suit up to play at Jerry's World in Dallas Saturday. Neither coach can afford to lose this game and the one that does will be on a hot seat for real. If the hogs can protect Austin Allen and give him time to throw, the hogs can win this one. I'm Thinking that ain't gonna happen.

Last week was a bad week all the way around for The Kid. Not only did my team get trounced, but for the first time in two years I was less then .750 on my predictions, missing all three! That leaves me at 5-4 going into Week 4