Journalist Have Ruined The Reputation of Fake News 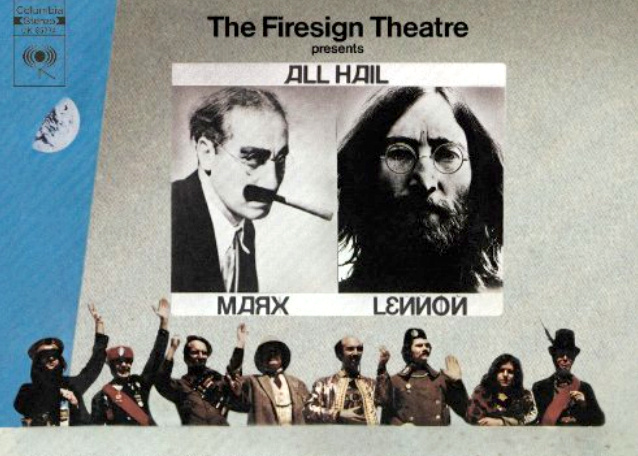 "Big light in skies, later to appear in east. Sonic booms scare minority groups in Sector B.
And there's hamburger all over the highway in Mystic, Connecticut."

Nestled among the shelves of my father's eclectic record library, scattered about in the Frank Zappa, Miles Davis and PDQ Bach LPs, were a smattering of vinyl jewels by the now legendary satirical comedy group, The Firesign Theatre. Their comedy is best described as cultural-lefty-absurdist, and was very much in keeping with their times (Nixon, Watergate, the Vietnam War, etc.). In live performances they wore bizarre costumes such as clown suits, safari garb with pith helmets, and some in the audience were likewise attired.  The sketches were well scripted with room for improvisation, with intricate wordplay and puns which were meant to be politically and culturally thought-provoking without being obvious.

I’ve been thinking lately about how much the Hate Trump Media has come to resemble this weird avant-garde ensemble. After all, “Fake News” was what Firesign Theater was all about. It was zany and absurd, and the joke was that the reality of life, especially contemporary American life, strained credulity, and invited not only satire, but a total flight into fantasy. A typical line from a sketch: “I don’t know what you know, but I do know that everything you know is wrong.” This illustrates the essence of Fake News, rooted in the leftist-inspired cultural divide that currently afflicts America.

The “mainstream media” (CNN, MSNBC, the three networks, the major newspapers) are so consumed by Trump hysteria that it places them squarely in this Firesign Theater zone. The NYT's Nicholas Kristof and his wife talk about the president in bed. CNN's Brian Stelter describes himself as “Trump addicted.” Any psychiatrist can tell you that monomaniacal, pathological hatred has its surreal aspects.

MSNBC’s interpretation of the importance of the Mueller investigation in its various guises is a good example of this “Credibile est, quia ineptum est” approach. Ricky Maddow, Stephanie Ruhle and Chris 'Soyboy' Hayes constantly strain to outdo themselves with conspiracy theories. One would think there were more Russians involved with the Trump campaign than populate the pages of War and Peace. More entertaining are the nightly shouting matches on Don Lemon’s CNN show. The Bill Maher-type formula dating from that host’s “Politically Incorrect” days is the model for Lemon and three or four indignant progressives spewing their inherent Trump-hatred at a lone conservative panelist.

The Batshit Crazy Lawrence O’Donnell reminds me of the Big Brother in the old “1984” Apple computer commercial, and Chris Matthews a ranting drunk in your corner bar. You never know, Brian Stelter’s future at CNN might involve honking a clown horn while wearing a pith helmet as an introduction to his commentary. Fake News Used to be a Lot Funnier. Journalist Have Ruined it. Lately, all this has been sending me back to Firesign Theater (easily found on YouTube) for perspective. Maybe a study of the works of Marx and Lennon is in order. Groucho and John, that is.......
© Posted By Diogenes Sarcastica™ on 5/22/2018 02:17:00 PM