For Some Unknown Reason the World Now Has a Giant, Half Naked Statue of Jeff Goldblum 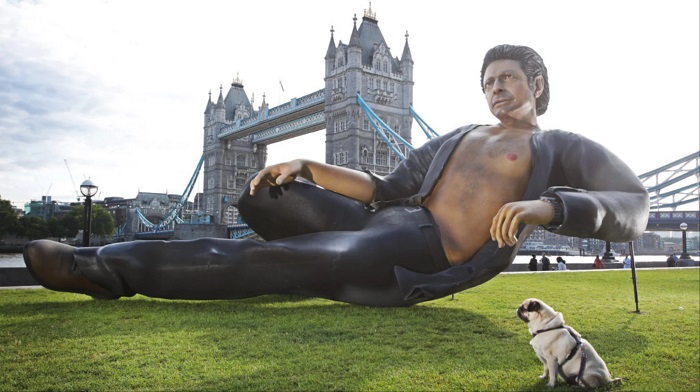 England would be a wonderful place if it weren't for the British who hang out there. I very much dislike all that King & Queen stuff, and Vice just gave me another reason to make sure I always vacation elsewhere......


"Jeff Goldblum is iconic in everything he touches, but there is no role quite so canon as his turn as Dr. Ian Malcolm in Jurassic Park, and no scene that captures his essence quite as well as that brief moment where he's sweaty as all hell and shirtless for some reason. It's been 25 years since that cinematic touchstone graced this world, and to commemorate it, London's NOW TV has constructed one of the greatest artistic achievements of our time: A 25-foot statue of a half-naked Jeff Goldblum.

It was an audacious move on the artist's part to even try to recreate such an impeccable expression of the human form, but the risk paid off. No detail was spared: The stubble is perfectly rendered, so subtle you'd miss it if you didn't take a closer look. His hand hangs loose from the wrist in that quintessentially Goldblum-ian attitude of effortlessness, of ease with the self. And those eyes: They gleam with a confluence of fear and knowledge—a mirror image of the look Goldblum flashed the camera just after Dr. Malcolm nearly lost his life to a T. Rex.

As hordes of admirers flock to the Mona Lisa daily or crowds jockey for a chance to glimpse the Sistine Chapel, already, a few fans have begun to express their devotion to Goldblum's massive, sweaty likeness. Those cultured enough to understand just how monumental this achievement is have made a pilgrimage to the statue, both to take in its full glory and to honor it the best way they know how.

Sure, Goldblum isn't British, and no, Jurassic Park has nothing to do with England, but just look at that masterpiece: the fleshy bulb of the nipple, the furrows of the chest hair, the pinnacle of what a human face can be."

According to the rules of chaos theory, there's a world out there in which this monument doesn't exist. Can someone please point me in that direction? Please.