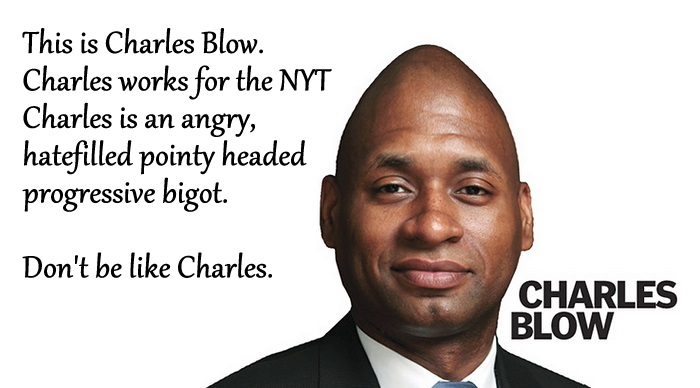 You would think someone at the New York Times would tap Charles Blow on the shoulder and say Charlie, stop punching yourself in the face dude. Do you read what you post?

Charles Blow is a product of affirmative action, a proud graduate of the diploma mill 'Grambling State Unv'. Charles then got a seat at the table. Now through his protected privilege of being black and bi-sexual, he accepts large paychecks and sends he kids the ivy league schools while spewing leftist tripe and laughing at white America as he lights the table legs on fire.  Charles Blow is a prefect example of what is wrong with America.

Blow's newest litter box liner titled 'Trump's Rage Junkies', he tries to convince us he's smart and Trump supporters are a bunch of lunatics thriving on rage he stirs in them. Blow, in his typical hypocritical fashion proceeds to punch himself in the face by spending the first third of the piece in his own leftist rage mode against Trump. I'd really like to think Charles is just stupid, but I've come to believe he is just filled with hate and a part of the brown power freak show the media would have you believe has swept the nation.


"It is truly a confounding time to be alive, to be an American.

We are watching as a president of the United States openly lies, fabricates and exaggerates while two-fifths of the population cheers him for it.

He spurns our allies and embraces our adversaries and people shrug.

He, his congressional allies and his propaganda arm are waging open warfare on the Federal Bureau of Investigation in an effort to tarnish it before its inquiry into connections between the Trump campaign, family and associates and Russia can be made public.

He is a racist who disparages black and brown people, whether they be immigrants, Muslims, people from Haiti and Africa, Barack Obama, the mayor of San Juan or Maxine Waters. People equivocate about it and excuse it.

He is attacking the press in the most aggressive of terms so that what they reveal about him will be viewed with skepticism.

He is attempting to weaken our institutions, our protocols and conventions, our faith in the truth, our sense of honor and our respect for the rule of law.

His unapologetic, unabashed crusade to fight off all efforts at racial and ethnic inclusion. They may not articulate it as such, but that is the nature of Trump’s policies: Promising to build a wall, disparaging Mexicans, separating immigrant families, the Muslim ban, decreasing even legal migration, denigrating protesting football players. Trump has vented an American racial anxiety, giving it power and a perch, giving it permission to be vocal and even violent...."

You punched yourself in the face again Charles. You rage eloquently as you write about Rage Junkies. Week after week you and your paper stir racial animosity and encourage undue fear on the left. Real rage Junkies are an easy lot to spot. They lash out. They make lists. They attack people verbally and physically. As in the case of people like the shrill banshee Joy Behar and other emotional wrecks who fret day-in day-out in the media about DJT, anger and rage are their weapons and the only emotions they have left.

Get a grip Charles. It's not rage you sense in Trump supporters, it's preservation of the American ideal we inherited. Is it perfect? No, it's not. But it won't ever be close with propagandist like you at work.  Believe me, if trump supporters were rage junkies as you say, you'd be a whole lot less comfortable in your Ivory Tower right now........
© Posted By Diogenes Sarcastica™ on 7/02/2018 04:51:00 PM
Labels: Charles Blows, Media Circle Jerk