It's indeed been an interesting year, and since it's time for year-end honors,
after a short hiatus we're again proud to drag out and present:


We haven't awarded The Annual GT awards for a while now, but after the past year we find this semi-distinguish honor ripe for the times. 2018 is finally in the books and despite the sniveling media's gleeful prognostications of disaster befalling the nation, the country survived the predicted apocalypse, otherwise known as the Trump presidency. We’re all still here although more people are employed and more people are keeping more of their hard-earned money. But that is not good enough for some.  The votes are tallied and we present our pick of those we really wish would be swept away to a far away galaxy and used for alien medical experiments - 2018's top obnoxious leftist/social justice vermin and recipients of the soon again to be coveted DMF Golden Turd Award.


The Dan Rather Award for “Excellence” in Media:
Ladies and Gentlemen, We have a tie!
Fredo Cuomo and Don Lemon

These are two of the most obnoxious back to back on-air news personalities. Whether it is the sissified SJW pontificating from Lemon or the smarminess of 'Cuomo the Younger', they literally make one’s toes cramp up with their silly banter. According to Lemon, Trump could cure cancer tomorrow and it would be an indication of his white nationalistic tendencies, or the work of Russians. Then again, nobody really watches their drivel given CNN’s quickly tanking ratings.

Allie from the Bronx (but raised in an upscale suburb)should be no surprise she is more than worthy of a GTA when Cornell University opened an exhibit of her footwear. She may be pleasant on the eyes, but harsh on the ears. Considering she won a race in which a sea slug running as a Democrat would have won, the outsized publicity afforded this member of Mensa (sarcasm intended) proves one thing: Boston University did a terrible job of educating this dolt. Fortunately, the recently knighted “future of the Democratic Party” will be around for the next two years providing ample fodder for ridicule. Perhaps, that is for the best. And to those who do not believe the opposition should be ridiculed, a big, sloppy raspberry to you! Pbfllltttt!!!!

She managed to get her face and Twitter feed into just about everything this year. She even managed to get a seat at the Kavanaugh conformation circus at the invitation of Diane Feinstein. Whether it was gun control, feminism, MeToo… you name it, Milano was there ready with a comment or Tweet. Unfortunately, she proved herself to be a worldclass jackass with every comment and Tweet. She needs to concentrate on an acting class and lay off the social justice in 2019.

The “It Looked Better on Paper” Award:
Michael Moore

Remember when the Michigan Land Whale's latest borefest of a documentary was supposed to bring down Trump once and for all? Remember, he suggested that the faithful surround the Capitol building, preventing Senators from entering and voting for Kavanaugh? As for his movie, he forgot one important thing: people have to see it first. They didn't. As for the second item, well… Kavanaugh was confirmed and sits on the Court. On the heals of a 2017 year ending bomb of a theater 'one-man-show', this makes Moore 0 for 2 in 2018. However, he does win hands down the award for most rotund jerk, although Bette Midler draggin' around a duffel bag full of double cream Oreos is giving him a run for the money in that category.

The hack queen of Chappaqua just will not go away. She is  still lashing out about losing the election in 2016 and just cannot seem to find an excuse she can stick with these days. Was it the Russians? Was it sexist voters? Was it that damn Electoral College thing? She needs to take a cue from the Evil Queen in Snow White and look in the mirror at why she lost. Her touted tour with her husband, serial groper and cigar aficionado Bill, was met with more empty seats than filled. That should tell her something.

The Helen Thomas Crazyass Anti-Semite Award:
The Leaders of the basket full of 'anti-penile /anti-white'
bigots known as "The Women's March."

The bearded and deranged Jim Carrey, a drunken Chelsea Handler, Kathy Griffith (yes..she’s still around), Steven Colbert, Jimmy Kimmel, Seth Myers (was this guy ever funny?), Meat Head Reiner and bloated Rosie O’Donnell, among others. Throw in the entire cast of Saturday Night Live (save, perhaps, Keenan Thompson) and others out there to numerous to name..... like those two dickheads with British accents on Comedy Central and that really ugly Canadian chick on.....

More than a year after Parkland, Hogg remains in the headlines. He’s like a case of herpes that won’t go away. This pompadoured punk pimp of the gun control movement displayed his hypocrisy by hiring ARMED guards for his loser book tour. Well, you know…those crazy NRA members might want to take him out. It should be remembered that this kid came to prominence by hiding in a closet, cell phone in hand broadcasting on YouTube as students and faculty were being shot in another building. It is sort of verboten to poke fun at these survivors of a school shooting tragedy, but Hogg invites the scorn heaped upon him. Please…just go to Harvard and get that non-existent degree in Political Science and shut the hell up. 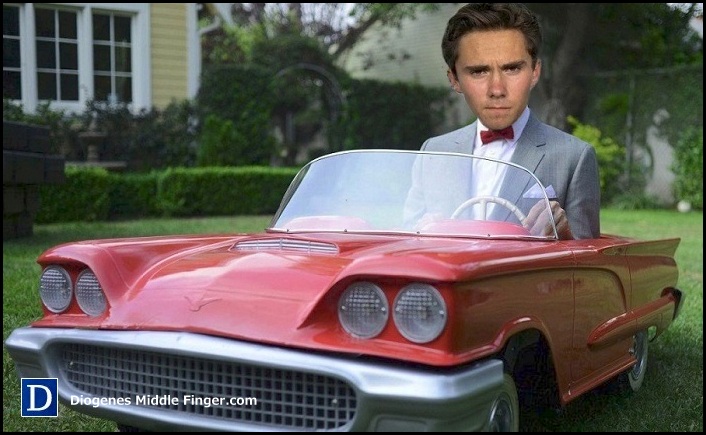 ~Thank You RightNation.US and
Pookie@TheBriefing Room and
Larwyn Links @Doug Ross Journal for the Linkage~
© Posted By Diogenes Sarcastica™ on 1/02/2019 12:52:00 AM