The Left's Hero to Zero 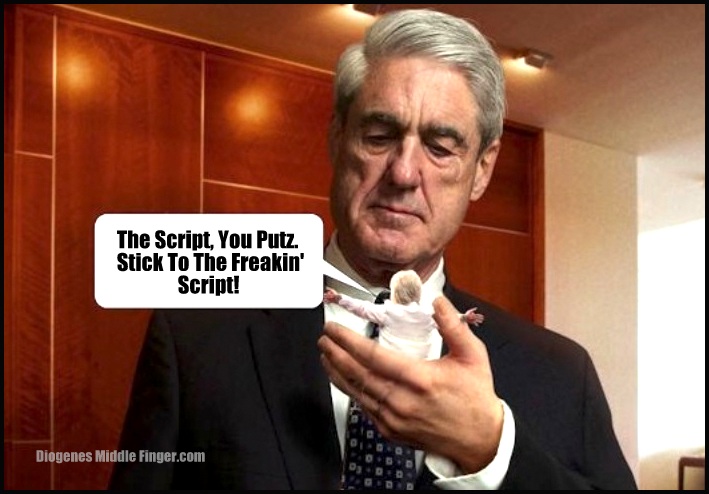 The Dems hoped that Robert Mueller had the magic bullet that would unseat Trump. But all he had was a denial that anything was "In his purview." And his gun was empty. All Mueller had was a cap pistol. With damp caps.......

FPM- It's hard to remember that not all that long ago, Robert Mueller was the great hope of the anti-Trump camp. The media described him as a fashion icon, a ruthless prosecutor, and a man who was on top of absolutely anything. Mueller was the man to put Trump away. T-shirts reading, "It's Mueller Time" were a fashion accessory for the #Resistance: "Vogue dubbed Mueller, a 74-year-old lawyer, “America’s newest crush”.


“He can evoke shades of Humphrey Bogart and has mastered a nearly Zoolander-esque gaze,” the style mag raved. A lesbian folk band wrote a love song to Mueller, crooning, “I see you on TV / I see you in my dreams”.

Spike Lee wore a t-shirt that screamed, “GOD PROTECT ROBERT MUELLER”. Chelsea Handler tweeted, “I’m starting to have a real crush on Mueller.” Stephen Colbert compared him to Batman. A California artist claimed that looking at a picture of Mueller reassured him that everything would be okay."

And then it all ended with a whimper.

The Trump-killer was just an elderly Washington D.C. apparatchik who couldn't handle the rigors of testifying and who had clearly allowed his supposed subordinates to handle the details of what had been misleadingly described as the Mueller investigation. The reason Robert Mueller never wanted to testify and why he needed counsel wasn't integrity. He just couldn't handle it.


"The political operatives who created a campaign to undermine confidence in the 2016 election, needed that too. They wanted someone to give their partisan campaign the professional look of a 74-year-old model willing to put his name on the investigation and be photographed wearing his costume to work.

The Mueller investigation was never about Mueller. The Washington D.C. insider was just a useful front man for a team of Obama and Clinton supporters, most notably disgraced figure Andrew Weissmann, whose ugly tactics were all over the circus."

Mueller wasn't running things. And he hardly knows anything. The Mueller investigation is dead. The Mueller report is a joke.