The 150th Season of the Sport of College Football 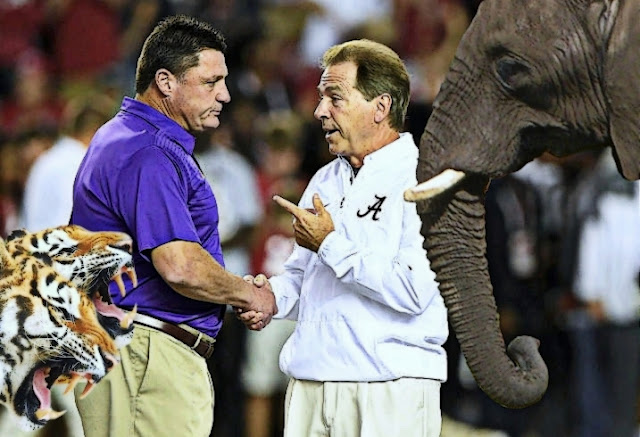 Down South, we only have three seasons, Spring, Summer and Football Season. And of course a few weeks a year that you actually have to use the heater in the car.  This year, before we even have a 100 degree day, lo and behold we're on the cusp of new season, the 150th Season of College Football.

The 2018 Season is now fading in the rear view mirror. In the SEC it was a year that brought many surprises. Like the Sports Monkey's assurances of the rising dominance of the SEC East which created some over-inflated egos, but really just turned out to be a long awaited parity among conference teams.

In the West, the Crimson Tide turned in a perfect A+ 12-0 regular season to the teacher, only to fail their final exam. The Gus Bus hit the ditch (kinda of a surprise, lets say) and Ed Orgeron started the year on the hot seat, but wound up sitting upon a throne of purple and gold. The LSU Tigers, who no one expected to be anything but  7-5 spoilers having one of the toughest schedules in Division 1, were all but written off. But the Tigers had a little something to say about it.

The high lite of the season for moi was October 13th, after the Tigers had already knocked off the #7 & #8 ranked teams in the nation, as LSU hosted #2 - the sports monkey's heir apparent to the Crimson Tide's SEC dominance, the 6-0 Georgia Bulldogs. Bolstered from the hype of the previous season and puff-chested from beating up on powerhouses like Austin Peay and Middle Tennessee, little did the Dawgs know what awaited them that Saturday afternoon at Tiger Stadium. This being the only game I was able to attend last year, it was a pleasantly cool afternoon of covertly sipping Old Charter 10 from my friends purse, watching Mr Heisman Trophy Candidate running for his life and frequently having to pull the Tiger stadium turf out of his face-mask. It was a brilliantly called & executed dirt stomping. I left Baton Rouge that night about as proud to be a Tiger as I had been since 2003.


So what can we expect from the upcoming SEC season?


This year I intentionally did not read the sports media's summer preseason click bait and hyping of team story lines. In doing so it seems I missed all the off-season silliness like Tom Herman whining about opposing players not being sentenced to life in prison for using the “Horns Down” gesture or Nick Saban's newest creative excuse for not winning a NC, and which Florida players have been arrested.  Preseason polls, rankings and power indicators before anyone's played a snap are purely conjecture and mean absolutely nothing, except to make every other conference hate the SEC for taking up so many spots.  LOL!!!

So my thoughts here are based solely on what little I did read last weekend of this coming season and influenced directly by how much Rue De Perle Bordeaux 14' I've consumed this evening.

SEC West - Plainly put, until SEC teams can give the Crimson Tide a two loss season, it a forgone conclusion they are and will be the top dog of the SEC. If Tua stays healthy, with their schedule, we could be looking at another 12-0 season for Alabama....If Tua stays healthy.

Jimbo Fisher is recruiting well at A&M and has cleaned up the affirmative action mess he was left with. With a experienced QB, the Aggies could be especially difficult to deal with. Clepson and Alabama are early loses and their schedule is brutal. But where have we heard that stumbling block before??

Auburn, will be Auburn. They too have a brutal schedule, and a freshman QB.  But, as he did at eleswhere, Kevin Steele is still building top 10 Defenses there, and that alone can help keep you in the game.  With Gus in his goofy visor and atrocious wardrobe callin' plays from the sidelines, anything can happen, and probably will....Beep Beep

There's lots of expectations in Baton Rouge right now after this spring LSU scored the addition of N.O. Saints pass offense assistant Joe Brady, and College Hall of Fame coach John Robinson as a game plan consultant. Joe Burrows has proven he's not shy and will call his own number if necessary, and is said to have a command of the offense not seen in Baton Rouge since 2011.

In the East - I'll be straight up and say it, I'm going against the grain. Until they prove otherwise,  I'm not convince Kirby Smart and the Georgia Bulldogs are a top 5 team they are said to be. Polls before week 3 are just conjecture. Name recognition plays a good part here I think. I'm not saying they not a good team, I'm saying some have bought the hype. Diogenes Don't.

But I will say this - with the exit of the Squirrel McElwain at Florida, I believe Dan Mullan can recruit better there than he ever could at Cowbell U. and is going to bring the Gators quickly back to prominence in the East. This year? Who knows which Fippy Franks will show up. I'd pick the Gators to win the SEC East, but I hear there may have a depth problem, among others, and Georgia does has a puff schedule. We'll know Nov 2nd.

I'll go no further, and mean no disrespect to the rest of the SEC Teams. Rather I will leave it at this; looking at the SEC schedules, I'm not totally ruling out a sleeper who could reek havoc. I firmly believe there is going to be some really big upset wins and unexpected losses this year. The odds are in favor.  And the wine agrees.

I do plan on trying to set aside some time to do football post this season, if only for the more important games, along with my prediction for the SEC and a few games for our long suffering DMF  Big10 fans, like YankeeBubba & Michael L. and a few others.

So as we await the beginning of 150th season of the sport of College football, and the 97th LSU home opener in Tiger stadium, I end with what ESPN Sports named one of the best traditions of South Eastern Conference Football, one which brings a deafening roar rising from one of the great cathedrals of college football, and one that first time visitors to Tiger Stadium rarely soon forget:  The prologue to every LSU home game  - The immortal words of public-address announcer Dan Borne:


"Ladies and Gentlemen, The Sun Has Found Its Home In The Western Sky.
It Is Now, Saturday Night In Death Valley!"