They Don't call Him Fredo For Nothing....


CNN should not ever be considered a legitimate information source of any kind. Need one more reason? Chris 'Fredo' Cuomo is allegedly a Law School graduate and a Licensed Attorney. And if you've ever watched his prime-time show you probable would say, No Really? And for some reason, be it a serious attempt to out-stupid Don Lemon, or just wants to sound like one of the anti-gun cool kids, doesn't recognize This Simple Principle of Constitutional Law 101:

The Bill of Rights are Restrictions on The Government. Plan and Simple. 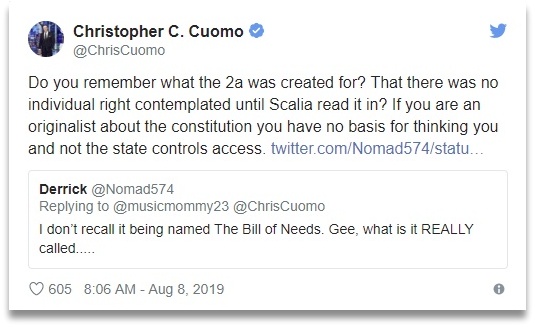 
"Notice the last sentence of Cuomo’s tweet, “If you are an originalist about the constitution you have no basis for thinking you and not the state control access.” He is saying because the Second Amendment only protects a collective right, in his opinion, then the true originalist position is to believe you only have guns if the state says so.

Cuomo did not say whether freedom of speech and religion (First Amendment), the freedom to pursue and possess private property (Third Amendment), and to be secure in our “persons, houses, papers, and effects” (Fourth Amendment) is collective as well. In other words, do we need state permission to speak freely, worship freely, do with our things as we would, and enjoy security in papers and effects?" - AWR Hawkins

You cannot discuss Amendments 1&2 without acknowledging the central tenets 'Shall Make No Law' and 'Shall Not Be Infringed', unless you are propagandist."THIS IS CNN"

If broadcasters still cared about the editorial independence of their employees, then comments like Fredo Cuomo's tweet would not be made by their journalists. For they further reinforce broadcasters presenting themselves as non-partisan veer in a particular direction, but not until journalists began to freely give away their thoughts on social media was such a smorgasbord of evidence presented.