To Be King of All You Survey: CFB Conference Championship Weekend

The LSU Tigers' march across the south and defeat of all of those who came against them now brings them to Atlanta and The SEC Championship Game against SEC East Champs, the Georgia Bulldogs.  Loftier goals remain for the Tigers, but Saturday is about representin', and kicking the Dawg's mangy butts and making sure the SEC Championship continues to reside in the West. Where It Belongs!

This will be only the fourth time LSU and Georgia have met to decide the SEC Champion, the Tigers taking two of the three previous games. This Saturday will be a battle of an up tempo offense built to confuse defenses and striking fast with explosive plays, against a defense built to force you to put together long drives. It's a classic showdown of the league's best offense against the league’s best defense (statistically speaking). Auburn had some success slowing down the tempo of LSU’s pass offense, but the Tiger's run game stepped up and gassed the Auburn defenders.

Joe Burrow put together a season that belongs on the shortlist of the best ever. His next TD pass will break the SEC’s single-season record. He broke the single-season passing yards mark last week. And in the backfield with Burrows is one Clyde Edwards-Helaire, 10th in the nation in all purpose yards. The defense is now healthy and at full strength. Coach O' has the Tigers focused. And Hungry.

Georgia QB Jake Fromm will have to have a career day against the Tigers. The Dawgs have managed to put up 400 yards and 27+ points just once in their last 6 games, and Fromm has completed less than 50% of his passes in 4 consecutive games.

The Bulldogs defense has played well holding 9 of 12 opponents below 100 yards rushing and all but one below 4.0 yards per carry. They have allowed only one rushing touchdown all season. The Dawgs are the only team in the nation that has held every opponent to 17 points or less in regulation, but ranks in the bottom half of the SEC in both tackles for loss and sacks.

Georgia plays a boring 'Kirby Ball' (i.e. Alabama Offense circa 2011). Wrestle control of the tempo in the first half, stake out a double-digit lead in the second, retreat into a shell, and sweat out a possible late rally by the opposing offense in the fourth quarter. If Georgia’s defense can do to LSU what it has done to every other offense it’s faced this year,  then the Bulldogs will be perfectly content to grind out another 20-something to 17-ish victory along the usual lines. I find that unlikely.

Part of the fun of watching the 2019 LSU Tigers this year has been listening to the skeptics as they aced every test, hit every note and defy every odd en route to the championship stage. Joe Burrow has done stuff that has made it impossible for the Tigers’ opponent to win.  This game won’t be any different. No blowout, but a solid win.  Beer and Flea Baths for everybody!

The Big10 Championship
Big East Wisconsin (10-2) vs Big West Ohio St. (12-0)
I really really really want to call upset. But I hesitate. It's extremely difficult to defeat a good team twice in one season (believe me, I know of what I speak) But as good as the Badgers are, the Bucknutts are not going to be denied the top CFB Playoff seeding even if it means resorting to sacrificing virgin cheerleaders to the football gods on the sidelines.

The ACC  Championship
Clempston (12-0) vs Virginia (10-2)
Daboo is awful whiny for a defending National Champion.
Bless his heart.

BIG 12  Championship
Oklahoma (11-1) vs Baylor (11-1)
Their first meeting was a squeaker. This one is a complete toss-up for me. Their one loss each was by a combined total of 10 points.  And I have to say, it would be great to see Jalen Hurts be the first Quarterback to lead two different teams to the College Football Playoff. 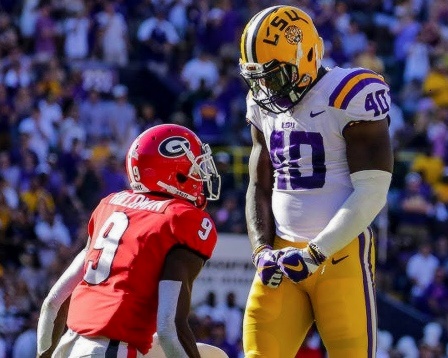