The Year of the Tiger. The CFB National Championship Final: Clempston vs LSU 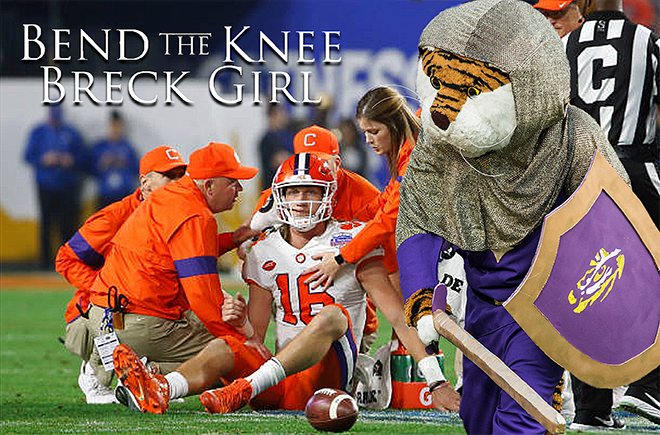 First Things First. A Note to visiting Tigers fans of both stripes: I have it on good word and can give you pretty solid assurances that the hotels and bars of New Orleans will not run out of Beer as do some other so-called host cities of CFB bowl contest. [/SARC]

Monday Night the Breck Girl and The Fightin' Dabos of Clempston roll into the Superdome to take on Bayou Jeaux and Coach O's LSU Fightin' Tigahs for the Championship of College Football.  Statistically, it will be the second highest scoring offense against the No. 1 scoring and passing defense in America. Statistically. The Fightin' Dabos haven't seen anything like LSU’s receivers.

The Breck Girl has never lost a game as a college QB. But there's a first time for everything they say. A victory by LSU would be their 6th win of their 15 against teams who are currently ranked in the top 9 of the Associated Press poll. A Clempston win would be their 3rd Championship title in 4 years, and win #30 in a row.

I had planed to sit down with a glass or two of my favorite spirits and write an epic detailed pre-game post complete with analysis and numerous reasons I believe my Fighting Tigers are to be victorious, not just to inform and entertain the DMF reader, but to bolster my own confidence of this truth.  But after some meditation on this years season I found it really no longer necessary.

You see, I remember LSU's 2007 Championship season very well, and in my mental wandering in time noticed some remarkable similarities to 2019.  I can assure the readers I have never believed in coincident. And I'm not one to believe in magic. But after this season, I do believe things can be magical.  With that said, I present this info for your consideration:

Mike the Tiger VI came to campus in the fall of 2007 as a majestic two year old and proudly presided over that LSU National Championship season.  His beautiful successor, Mike VII, became two years old this season.

In 2007, Les Miles was in his third season as Head Coach of LSU.
This season is Ed Orgeron's third full year as Tiger HC

LSU won the 2007 Championship in the New Orleans Superdome, again the site of this years crowning of the CFB Champion.

In 2007, LSU defeated the Ohio St. BuckNutts, a participant in the previous years Championship contest.  Clemptson will take the field Monday as the Defending National Champion.

I once commented to my SEC Sister Curmudgeon (maker of most excellent Game Day graphics) sometime before before this years SEC Championship game, that I was starting to believe the stars may be aligning and the gods of football were gazing favorable upon the Purple and Gold. She agreed. Then this weekend I learned of one more fact that wiped away any doubt in my mind.........

The very day Billy Cannon,  LSU's only Heisman Trophy Winner died, the 2019 Heisman Winner signed his transfer to play at LSU.  In 1958, Cannon led LSU to a Sugar Bowl win in New Orleans to secure their first National Championship of the modern era........by defeating Clemson University.

For coach O's Tigers, it's more than just about a ring. More than just about a trophy. It's, indeed, about hours and hours of sweat and pain in the early morning hours of the sultry sun rises of a hot Louisiana summer when most everyone else was still asleep, when no media or TV cameras are on them.  It's about pen-point focus. On a shared goal long set, now just sixty minutes away.

One Team. One Heartbeat.