"Through the campaign, candidate Trump tapped into a deep vein of concern among many citizens that America is at risk and is slipping away… Attacks on President Trump are not just about destroying him but also about destroying the vision of America that led to his election."

The 2020 political cycle is being utilized to mask the extremely hostile revolutionary nature of these events. Even the violence is a distraction. Current intelligence indicates that a siege of the White House may initiate on or about September 17th and culminate in a November 3rd election crises that carries on past the election. - former NSC Staffer, Rich Higgins

We will lay siege to the White House. We will sustain it for
exactly fifty days. This is the #WhiteHouseSiege.

The Canadian based group, known as the Blackspot Collective credited with starting and “branding" the Occupy Wall Street protests, are plotting to “lay siege to the White House” for 50 days: from September 17, the anniversary of the Occupy movement, to November 3, Election Day.  To little US media attention, they called out to their minions by issuing a series of “tactical briefings" last month. For those who may have  forgotten, this is the group that spawned, and do not condemn, the violent fascist movement we now know as ANTIFA. 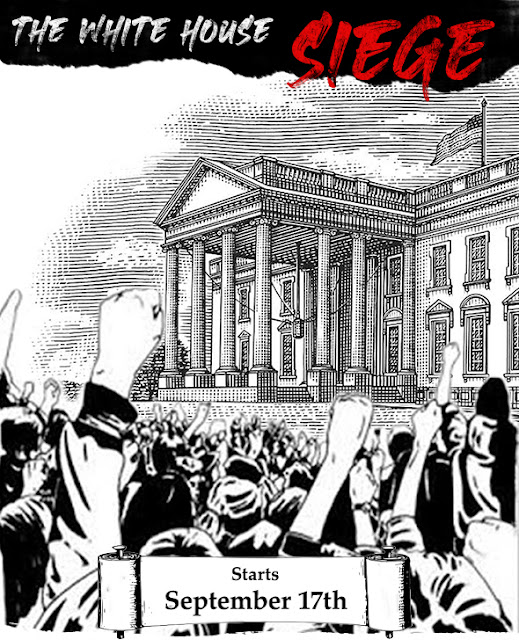 
While, this howling void of a president, his sins too many to name, sits smugly atop a corona death-toll that may surpass two-hundred thousand Americans by Christmas, it’s time again for dramatic, decisive action. Which is why, on September 17th, in the original and enduring spirit of Occupy, we and tens of thousands of our fellow citizens will stream into Lafayette Square, in Washington. D.C.

Lawyers are already in court, mounting pre-emptive strikes and preparing for the scorched-earth scenarios likely to come … Together we can organize pop-up sieges at federal buildings in dozens of cities. What can they do if hundreds of thousands of us turn up all over the nation’s capital, day after day.”