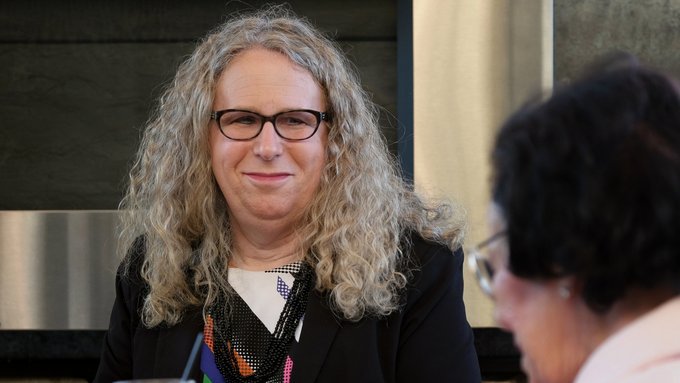 Joe Biden (?) just named the Pennsylvania Transgender Secretary of Health to be US Assistant Secretary for Health. No really.

"President-elect Joe Biden announced Tuesday that he will nominate Rachel Levine, Pennsylvania’s top health official, as his assistant secretary of health. Levine, a pediatrician, would become the first openly transgender federal official to be confirmed by the U.S. Senate."

If this was really Joe's idea or those who handle him, this is a hideous choice and one that can only be explained by the leftist subservience to two gods.  The first is the worship of the “first [fill in your racial/ethnic/sexual minority here]” to hold as certain post as if immutable characteristics such as genitalia or melanin (or variable ones such as mental instability) were, themselves, qualifications for office. The second is his utter obeisance to the cause of transgenderism.
Regardless of Levine’s desire to be something that he is manifestly not, that would be a woman, Levine’s character makes “her” unsuitable for confirmation and “she” should not be confirmed. Levine, while ordering Pennsylvania nursing homes to accept Wuhan patients, removed his own mother from a nursing home to keep her safe, cold-bloodedly condemning thousands of infirm and elderly Pennsylvanians to a preventable death.
In a sane nation, Levine would be indicted for manslaughter in Pennsylvania and not be in line to establish health policy for the nation. But then, in a sane nation Joe Biden would not be on the cusp of becoming president.
[RedState]
[WSJ]
© Posted By Diogenes Sarcastica™ on 1/19/2021 06:45:00 PM