I don't like to play the IQ card, but sometimes you have to, for example, with recalcitrant children or uncomprehending liberals. But I repeat myself. Liberal institutions are aimed at ignorant and/or deranged adolescents, not normal adults.  We don't appreciate the gulf that exists between the intelligent and stupid.  Perhaps even more destructive is the abyss between the intelligent-and-educated and the intelligent-but-indoctrinated. The latter are the really dangerous ones, in part because they have just enough intelligence and more than enough obedience to quickly assimilate the indoctrination and then pass it along to the stupid. This is the role of the educational establishment in general and teachers unions in particular.
And let's not forget the media. Have you noticed how many channels are beamed into your home, and the number of them that are addressed to your level of intelligence? It most always approaches zero.  Show me the intelligence Joy Reid speaks to, and I will show you an intelligence that, for whatever reason, failed to actualize. 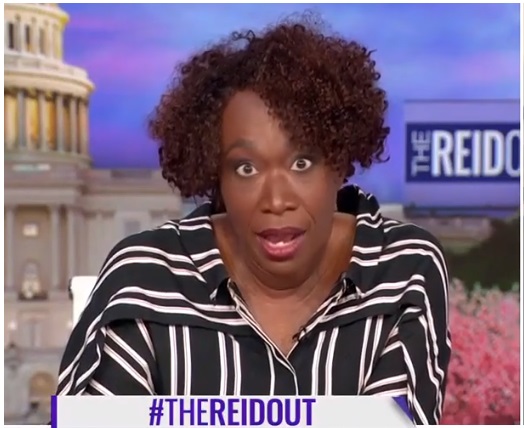 How can one respect the intelligence of someone who can't even see that Joe Biden is an addle-brained tool? Is this inability just stupidity? Mass indoctrination? Collective delusion?  Mass culture is aimed squarely at the 100 IQ cohort, and you probably don't hang out with too many of them, although you no doubt encounter them every time you leave home.
You probably haven't done this in ages, but I dare you to turn on the local news for a few minutes.  Behold! Your own hometown Joy Reid.  Stupidity can't really radiate, nevertheless I bet you can feel it burning your skin.  Alternatively, try watching a press briefing by Jen Psaki, who sounds like someone giving a report on a book they didn't read.  They are fascinatingly stupid and almost mesmerizingly demented,  yet not nearly as demented as would be Joe Biden in a press conference spontaneously responding to hostile questions. I would pay for that.
Not only is the left composed of boring lunatics saying tedious things, but they want to ban the intelligent people with interesting ideas. Conservatives understand liberalism, while the reverse is not true. Which is why they used to just engage in slander, demonization, and projection, now they're just censoring us altogether. They've never been able to answer our arguments, and now they're just being honest about it: no opinion for you! That's where I draw the line.  Stop it!
Just as there is a mystery of evil, there can also be a mystery of stupidity and mental illness, because it partakes of the absurd, and absurdity corresponds to the unintelligible.  No one will ever get to the bottom of Keith Olbermann.
~ Thank You WHATFINGER NEWS for the Linkage! ~
© Posted By Diogenes Sarcastica™ on 4/27/2021 04:00:00 AM