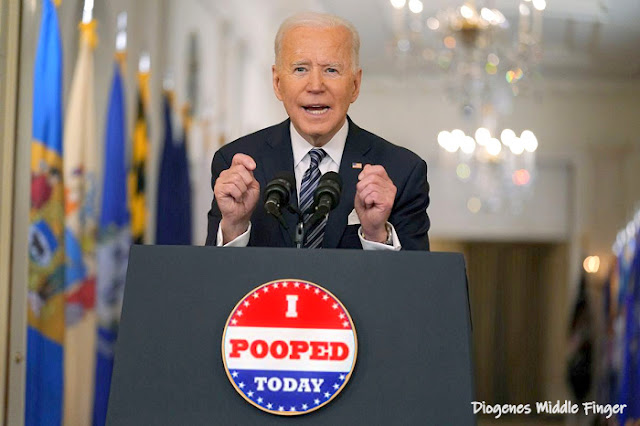 46* for the Nobel Peace Prize
Sadly some Kool-Aid drinker that writes for The Hill thinks 46* deserves the Nobel Peace Prize.  No, I’m not kidding. Let’s forget for a second that Biden probably can’t even say 'Nobel Peace Prize' without reading it off a teleprompter. So what has he done to deserves this award?
To be fair, some other lint licker nominated Biden a while ago.  But Brent Budowsky at The Hill just thinks he definitely deserves to win. Why? Well, if you want the cliff notes version, it’s for no good reason.  But if you want to hear what Brent Budowsky has to say, it’s because of all he’s achieved and all he aspires to achieve.
Now, I would probably label his accomplishments as ''Was No one watching him??'' and his future accomplishments as "dear Lord, why is this happening??" But Brent seems optimistic. I'm not sure why. And let's not forget, Joe's former boss snagged a Peace Prize for nothing more than having a nice crease in his pants or big ears or something. I can't really remember.
Brent thinks that after Trump dividing us (Biden would never say ANYTHING divisive, racist, or inappropriate, I mean besides everything he’s consistently said over the past 4 or 5 decades) Biden is restoring America’s leadership.
I figured Brent made this dumbass statement BEFORE Biden embarrassed himself and all of us on the world stage at the G7 summit in England or when he broke protocol three times with the Queen. But nah. This ratchet opinion piece came out yesterday morning.
Clearly this Brent Budowsky lives in a different universe than us. He sees Biden as compassionate and powerful. I only see a bumbling idiot.  And I do try to watch various news sources so I get a more balanced understanding of what’s going on in the world.  Biden is always an idiot.  Even CNNLOL recently ran a segment how unprecedented it is for the President’s handlers to prevent him from answering questions, literally screaming at him to stop talking.  I guess that’s all that power and confidence Brent mentioned.
If somehow Joe did manage to mumble his way into a Nobel Peace Prize, all it will tell me is that the award has gone the way of the Times Person of the Year Award.  Everything is meaningless.  Kinda of like Victoria’s Secret getting rid of their angels and hiring the flat chested dyke Megan Rapinoe and some plus sized chick to sell lingerie. That’s going to work out well. Or like when YouTube awarded YouTube with the YouTube free speech award.
But Brent saw Biden in all of his glory and his loins quivered. There’s a leader and a bastion of hope for humanity, Brent thought. He deserves the Nobel Peace Prize, Brent thought.
The original unedited article by Ksenya Aleksandrova first appeared at COTR.
© Posted By Diogenes Sarcastica™ on 6/18/2021 04:39:00 AM