The Lincoln Project Continues Habit of Stepping on Rakes

Yesterday, Florida Governor Ron DeSantis signed into law a bill effectively banning confused men who think they are women from competing in women’s sports in the state of Florida.  As expected, DeSantis’ signing the law on first day of the “Pride Month” triggered the Usual Suspects, including the unhinged fanatics at the ironically named Human Rights Campaign, which is as strong an indicator as there can be that DeSantis absolutely did the right thing.
During the signing ceremony of a law that very well may effect her own life in the future, the governor’s young daughter Madison was next to him and handing him the pens with which to sign the bill: 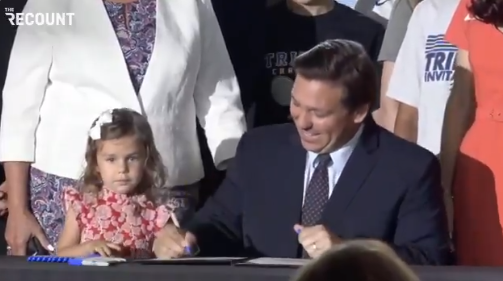 For reasons only known to him, Lincoln Project's Stuart Stevens, one of the more outfront members of the scummy group thought it’d be a good idea to use DeSantis’ daughter as a weapon with which to attack the popular Governor:

"I wonder when this girl grows up, how she’ll feel about being used as a prop in selling a piece of legislation that hurt people she is likely to go to school with, work with, go to church with. Using kids to sell hate for political gain is a favorite @GovRonDeSantis move."

That a member of a group that turned a blind eye for months as allegations swirled around them of predatory grooming behavior towards young men were being made against Lincoln Project would feign he cares for the young daughter of a governor he despises solely because of his political alliance with DJT was not lost on the politically aware who took to the tweeter to absolutely burn his ass for his lack of self-awareness and audacity.
A sample:

Because we know if the Lincoln Project cares about anything, it's the well being of minors. https://t.co/NpwZ8inTXA

When you’re scared of @GovRonDeSantis so you go after his kid instead...🙄

I wonder when any children of this guy grows up and how they'll feel about their dad being part of an organization that knew about and covered up that a child predator was in its inner circle. https://t.co/dkrnbQRAK2

She’s a child, and Stevens and his colleagues at the Lincoln Pervert League should do the right thing and respect that instead of projecting their obvious inadequacies onto Gov. DeSantis. But then again, we know respecting underage kids (and women, for that matter) is not the Lincoln Project’s strong suit, so we shouldn’t really expect any better from this clown or his motley troupe of corrupt prevs.
[RedState]
[Sister Toldjah]
© Posted By Diogenes Sarcastica™ on 6/02/2021 04:14:00 PM
Labels: Lincoln Project Pervs, You Gonna Eat That?