Back before he became a permanent resident of the island, Barky Obama was known to bundling his extended tribe, advisors, 82% of the Secret Service and sympathetic journalist and swoop in and disrupt the beleaguered island known as "Hollywood East" during August.  It was 8 nightmarish days and nights of shut down roads and restricted movement for inhabitants of Martha’s Vineyard, who, from previous visits residents had come to liken the Obama vacation/birthday invasion to an Outbreak of Herpes.
In 2014, there were other uninvited guests to the area and our own DMF/MIDDLE FINGER NEWS SERVICE INTERNATIONAL broke the exclusive story:
MFNS Archives August 9, 2014
North Korea Spies on Obama's Martha's Vineyard Vacation
EXCLUSIVE PHOTOS: 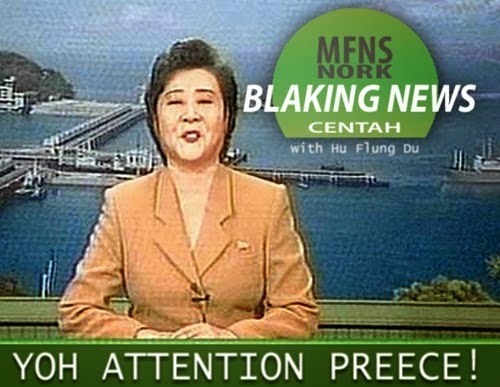 A Military spokesman said the submarine was able to penetrate the Nantucket Sound under the cover of darkness Friday morning and navigate in daylight the coastal waters of Martha's Vineyard by running shallow while towing a cardboard cutout of Secretary of State John Kerry on a windsurfing board, assuring no one would pay any attention or come near.

The newest addition to the DPRK arsenals secret voyage was commanded by the North Korean Supreme Leader himself, 1st Admiral Kim Jong Un. The mission included spending 18 hours off Cape Cod Friday to gather intelligence and two undetected passes through the Vineyard Sound in daylight on Saturday.

The major news agencies remain skeptical of the story, but MFNS have obtained exclusive Nork Naval photos taken on the mission as proof the North Koreans did indeed pull off the spy mission undetected.


Stay Tuned to Middle Finger News for any developments
on the latest taxpayer funded Obama Vacation.
~ Thank You WHATFINGER NEWS for the Linkage! ~
© Posted By Diogenes Sarcastica™ on 8/08/2021 05:30:00 AM
Labels: Kim Jong #un