DJT Lives Rent-free in Biden's Head, and It Seems the Lease Has Just Been Renewed. 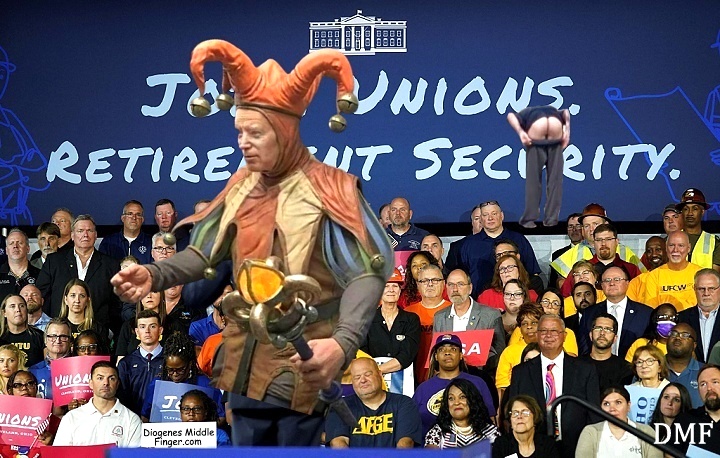 We are only a year-and-a-half into Biden’s presidential tenure, and things are not going well to say the least. That’s the opinion of a full 85 percent of the Americans from both parties polled who believe the country is headed for the ditch. So, what is a president to do when his whole  administration is collapsing around him? Blame Donald Trump, of course.
Talking nonsense in Ohio yesterday to an audience of paid to be there union members, Joe had this to say:

"The previous administration lost more jobs on its watch than any administration since Herbert Hoover. That's a fact. All based on failed trickle down economics...We came in with a different economic vision."

Yeah, how is that "different economic vision" working out Joe? Sky-rocketing inflation, the deep drop in the stock market, record gas prices, all the foreign policy fuck ups? GD Putz!
I get that Biden’s brain is mush, but you’d think he’d remember the global pandemic that took place in 2020 before spouting off about job losses. State-level lockdowns happened across the country, putting the economy into an artificial coma. Apparently, Biden recalls none of that though, instead choosing to blame “trickle-down economics” for the job losses under DJT, a contention completely devoid of reality.
Never mind that the economy was booming under DJT until COVID hit, making Biden’s critique rather absurd. To put it succinctly, when the current president is spending all his time obsessing over the former guy, that current president is losing.
Biden may not perceive much reality these days given his mental decline, but he knows enough to know he’s been an abject failure. With no accomplishments to talk about, all he has left is making awkward, false mentions of Donald Trump.
While I don’t agree with Biden’s politics one bit, it’s still sad to watch a guy crumble like this. He can barely speak, his jokes make no sense, and he’s been reduced to squinting at a teleprompter, just hoping to get through another event. Someone should really step in and stop this elder abuse. And the country can't take much more of this screaming full speed down the highway blindfolded.
~ Thank You Larwyn's Linx@ Doug Ross Journal for the Linkage! ~
© Posted By Diogenes Sarcastica™ on 7/07/2022 04:30:00 AM
Labels: The Continuing Adventures of Joe Biden