A Textbook Example of Tyranny

So Virginia introduces a bundle of radical laws to destroy 2nd amendment rights, militias, sale transfer and registration bills, and the People of Virginia says no, and we're going to vote you all out next term.

Virginia says we're not going to wait, we'll petition your removal from office, and get almost a 3rd of the 240K signatures to remove the governor and starts petitions to remove delegates.

Virginia government responds by introducing a bill to raise the amount of signatures from 10% of the prevailing vote, to 25%.

Folks, this is the a textbook example of tyranny. "We're the government, and we'll do anything we want, whether you like it or not. We won't let you vote us out, we won't let you remove us from office.... And if you can't possess the weapons that a militia would need to force us out of office, then there's absolutely nothing you can do about it"

With good cause, and to counter the fake news media, I think it’s smart to verify what you say, so here are screenshots straight from the Virginia Legislative Information System:

Surgeon General Position is No Place for Radical Politics

President Obama and current Senate Majority Leader, Harry Reid, are not about to roll over in the face of the incoming Republican Senate majority.  Their first confirmation victory in the remaining days of the current congress occurred Monday evening with the confirmation of 37 year old Dr. Vivek Murthy as U.S. Surgeon General.

Murthy's nomination has been in limbo since he was first nominated in 2013.  It seems everyone of Obama's nominations has been made on the basis of strong political allegiance to the president's radical ideological agenda, rather than what is in the best interest of America and Americans. 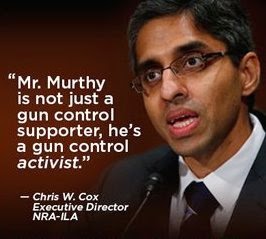 The position of U.S. Surgeon General would seem to have no place for politics, but it is now obvious it has become politicized with the confirmation of a doctor with little practical experience and a strong desire to politicize the position along the exact radical political lines and agenda of the president.

What makes this otherwise nondescript position rather important in these times, revolves around two points to be made.

Again, Dr. Murthy is medically inexperienced, which makes it questionable if he is actually qualified for the position of the nation's Surgeon General.  Murthy's greatest activity has been centered around his creation of an activist group called Doctors for America, which was originally called Doctors for Obama and is essentially a propaganda machine for all things on President Obama's agenda, the most significant of which is gun control of all things.

The second and most important point to be made is that Murthy brings blatant politics to the position of Surgeon General.  In particular, he is a political hack with a political activist agenda bent upon using the power of his office to push for wide ranging and radical national gun control laws, rules and regulations by co-opting the lagging liberal gun control agenda and declaring guns to be a national health concern.

Needless to say, the NRA considers Murthy a most serious detriment to an individual's exercise of their 2nd Amendment right to keep and bear arms.  Republicans in the new Congress will have to be very vigilant in monitoring  his activities as he uses his position as a bully pulpit for national gun control.  Republicans will be further challenged to rein in Murthy as he tries to use his position for gun control objectives.

Senator Joe Manchin (D-WV) voted no because of his concern with Murthy's strident political activism in the anti-gun movement.  When Manchin voted against Murthy, you know there is concern among even some Democrats about Murthy's extreme activism on gun control issues.  However, even with Manchin's "no" vote, the Democrats managed a 51-43 vote for confirmation of Murthy with their current majority in the Senate, which will change on January 3, 2015, with a Republican majority of 54-46.

Rob Janicki is a retired educator, strong supporter of the 2nd amendment and all around good guy, as well as owner/operator of the website Wired Right  and owes me 20 bucks.