Looks Like Iran is doing a good job
of blowing themselves up.
Mysterious explosion rocks Iranian city of Isfahan:
JPOST.COM 11/28/2011 - A large explosion rocked the western Iranian city of Isfahan, semi-official FARS news reported Monday afternoon. According to the report, the blast occurred shortly after 2:00 p.m. FARS did not reveal the cause of the explosion, which was large enough to be heard throughout Iran's third largest city.

The cause of explosion unknown. The explosion occurred two weeks after a massive explosion west of Tehran which killed 17 troops, including an IRGC officer responsible for the development of some of Iran's most advanced weapons. Iran claimed it occurred when soldiers were moving explosives between bases. Isfahan is home to nuclear experimental reactor, uranium enrichment sites.


Military research caused missile base blast:
REUTERS 11/16/2011- A massive explosion that killed 17 troops including an officer regarded as the architect of Iran's missile defenses last week took place during research on weapons that could strike Israel, the armed forces chief of staff said on Wednesday.  Iranian news sites identified one of the dead as Brig.- Gen. Hassan Moghadam, a top IRGC officer responsible for the development of some of Iran’s most advanced weapons. The explosion took place inside a base called Bid Ganeh, west of Tehran, which is reportedly used to manufacture and store Iran’s long-range ballistic missiles. 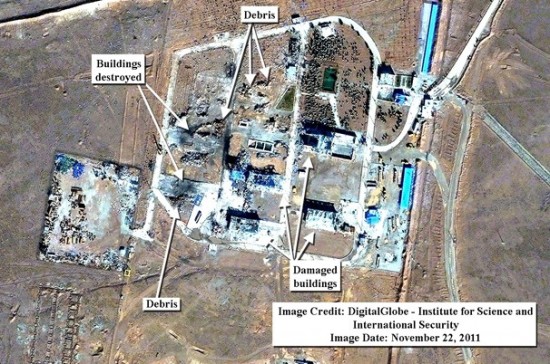