Editorial
From the Board of Diogenes' Middle Finger

Linden Borden is a Harry Truman type character. Only five foot two inches in stature, but of strong Viking stock, the Presidential Candidate is a self-sufficient small businessman; a boat builder by trade from the wilds of Minnesota. His business savvy and understanding of the needs of small business is sorely missing from the present field of GOP candidates. Sure, there are Tax Lawyers, moneyed Ex-Governors, wealthy Ex-Congressmen and even a Space Cadet vying for the nomination, but we feel Mr. Borden is heads above the rest of the field. 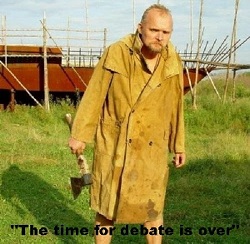 His strong suit is his understanding of simple economics: You can't spend more than you take in. Borden knows how to wield a mean ax, and plans to lay waste to the bloated federal budget and stop the idiotic wasteful spending. The present field of candidates see billions as chump change, Linden Borden sees that as the problem.

We share Borden's distaste for the front running top tier candidates and their childish infighting and pandering performances at the debates, while allowing an "off the wall Ron Paul and an overgrown Q-Tip like Newt Gingrich" on stage and denying Mr. Borden time to state his platform, is egregious in our eyes.

We feel Mr. Borden is scary enough to get congress in-line and threating enough to keep our enemies at bay. We know he will not have any empty sexual harassment allegations leveled at him as some candidates have because as far as we know, no women has gone near him in years. The almost unbelievable ground swell of support we witnessed on College Campuses as well as in Bingo Parlors and Burger Doodles all over New Hampshire last week make us believe the third tier candidate is poised to explode in a major breakout and run to the front, leading the pack into the early primary contests. All across the state, from the prestigious environmentally conscious, cutting edge 'Cannabis Technological Institute' to the 'New Hampshire School for the Blind and Infirm', and the historic 'New England Academy for Wayward Nymphomaniacs', we witnessed rallies and grassroots support we haven't seen since the Dukakis campaign.

We at Diogenes Middle Finger think it's Linden Borden's time to shine, and wholeheartedly endorse his campaign for President.

He has surrounded himself with some impressive advisers, the likes of the eccentric but knowledgeable Professor Ichabod Butouski of the Minnesota State Junior College Physics Department, Will Profit, Chief Editor and CEO of Capitalist Preservation and Texas State Chairman for CTFBA (Cut the F**king Budget Already Campaign), Snags Fitch, Grand Lizard of the St. Paul Masonic Elks Optimist Club and Sunshine Butts, contemporary poet and rummage expert. His intended Cabinet nominees we find also impressive. Announced as his potential Commerce Secretary is English born Marvin Ashcott Hayes, the somewhat eccentric Minnesota Tampon Magnate, and for Transportation Secretary, Link Pisner, former biker and expert on the nation's roads and highway system.

On Foreign Policy, we here at Diogenes Middle Finger do not agree with Candidate Borden's insistence on nuking Guatemala in retaliation for his 1981 conviction (later overturned) for importing Toupees made from hair of endangered species, but feel his views will be tempered by his choice for Secretary of State, Klash Bazbo, who should be over the ugly head wound suffered in a Viking Raid reenactment on a Wisconsin girl's school, and out of physical therapy in time to be confirmed in 2013. The only possible problem we see with presently announced Cabinet choices in Congressional Conformation Hearings could be the pick for Attorney General, Vincent “The Knee" Pelotso. Mr. Pelotso is a businessman and expert on Law and the Federal Correction System, having been through it many times.


The Editorial Board of Diogenes Middle Finger believe it's time to cut the crap and get the country back on track. We also believe this is the first and most important endorsement of The Linden Borden for President Campaign, with many to follow in our steps. 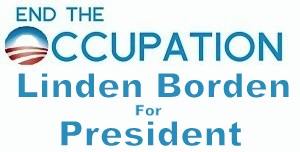