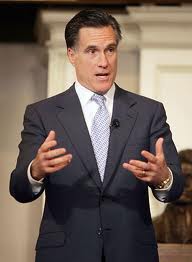 Middle Finger News - The Romney campaign was dealt a serious blow tonight after his win in the Nevada Caucus. The former Governor and presumptive front runner found himself facing startling accusations of sexual impropriety going back to before his days as Massachusetts Chief Executive. Even more surprising than the actual allegations that were leaked to the press was the source of the information: Mitt Romney himself.

"I've had sex, like, five times," Romney said at a press conference to address the charges. "I mean, granted, I haven't had it since 1980 or '81, but still - that's a lot. I almost can't count that on one hand. And every single time I've had sex, it has resulted in a child. Every. Single. Time."  Romney fell short of defending his past indiscretions but was unapologetic when reporters pressed for details about the mothers of his children, saying he actually impregnated the same woman over and over and "would do it again in a heartbeat." Romney said that unlike an un-named  former competitor of his, he could remember every detail of each sexual fling, but he's now a changed man.

"My magic underpants have been firmly in place for over 30 years now," Romney told the press. "They may be a bit tattered, a bit worn, kind of like my campaign, but also like my campaign, they have a lot of support and cover my ass. This political season we need support from all areas and nothing gives you more of a lift than magic underpants. If we leave it to the Democrats, they will lead us down a path of big government, big taxes, and big skid marks."

Romney's wife Ann has yet to make any formal statement regarding the allegations, although she was overheard telling a friend, "Five times? Mitt? I assume he didn't mean all at once." Rommey family friends say Ann Romney plans to stand by her man. "You better believe Ann knows all about Mitt's sordid sexual past," said one family friend who asked not to be identified. "But she's not going to let some dirty old pair of magic underpants stand between her and the White House, that's for sure. "Ann's like the Latter Day Saints' Hillary Clinton," one friend noted.

Upcoming Presidential Candidate and major challenger to Rommey's candidacy,  Linden Borden, issued a statement on the whole torrid affair, but due  to the language we are unable to repeat it here.