Obama has shattered the amount of time and number of events
any president has ever spent to focus on saving their own job. 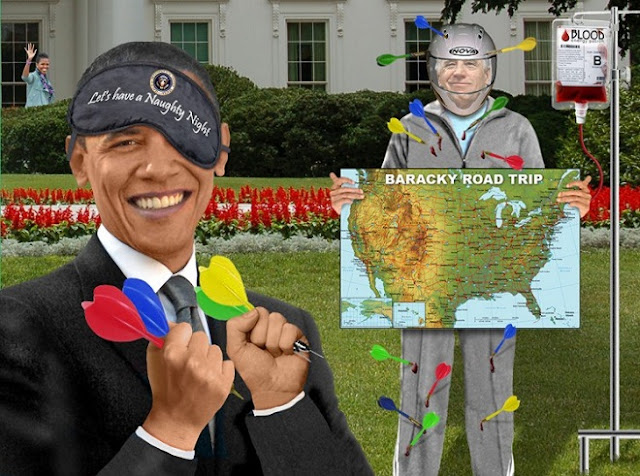 
By day's end, President Obama will hit 100 on the campaign fundraising scoreboard.


He reaches the century mark by doing four money-raising events for his re-election campaign during a seven-hour swing through New York City. The visit follows a speech this afternoon here in Nashua, New Hampshire on the energy components of his strategy to boost the economy and create jobs. It has taken Mr. Obama less than a year to do a hundred re-election fund-raisers since he officially filed his candidacy for a second term with the Federal Election Commission on April 4, 2011.


The hard-driving effort to raise money has taken Mr. Obama to 13 states. The contributions taken in at Mr. Obama's fundraisers go to the Obama Victory Fund, an entity set up to raise funds simultaneously for the Obama for America campaign and the Democratic National Committee.


The most well-heeled contributors are asked to contribute $35,800 each. It's the legal maximum under FEC rules and get split this way:


$30,800 maximum to the Democratic National Committee


The latest filing with the FEC shows the Obama campaign has raised over $140 million of which $106 million are from individual contributions. And as of January 31st, the campaign boasted a war chest of nearly $76 milllion collars "cash on hand." That compares to $63 million raised to date by former Massachusetts Gov. Mitt Romney's campaign, which had $7.6 million to spend as of the end of January.


Money doesn't always buy a political victory, but in 2008, a vastly superior war chest was an undeniable factor in helping a junior senator from Illinois win the presidency in a campaign against Arizona Sen. John McCain.


As president, Mr. Obama has yet another fund-raising advantage. He can travel the country at relatively little cost to his campaign. When he flies to Los Angeles for a series of fund-raisers, his campaign pays only a minuscule fraction of the $180,000 per hour it costs to fly Air Force One.


Like its predecessors, the Obama White House refuses to disclose exactly how it calculates the costs of political travel to be reimbursed to the government by the Democratic National Committee or the Obama campaign.


Unlike his predecessors, Mr. Obama claims to run the most open and transparent White House in history. When it comes to details of political fundraising, the transparency is opaque.