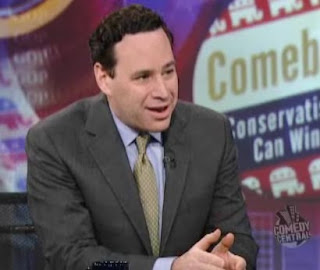 A one-time true believer who helped coin the “axis of evil” label, who wrote a book defending Bush 'The Right Man', and who was foreign policy adviser to the presidential campaign of Rudy Giuliani, David Frum has since been called a turncoat, a rat, and a “RINO”  (Republican in Name Only). He once wrote speeches inside George W. Bush’s White House, but now finds himself in exile from the power circles of America’s conservative movement with a surprising new turn in his career.


The financial meltdown of 2008, and the government bailouts and mass joblessness that followed, led to the Tea Party backlash and a small-government drive among many Republicans. But they led Frum in the opposite direction.

The Wall Street Journal editorial page has denounced him as “the media’s go-to basher of fellow Republicans.” His sins have included denouncing Sarah Palin (“too irresponsible, reckless and crazy to be president”) as well as right-wing stars like Glenn Beck, Rush Limbaugh, and Andrew Breitbart on the day he died.

He rcently told the WSJ, “I was intellectually prepared, but I was not psychically prepared for the radicalism that took over the party."

Wednesday I received a Publishers Advance Readers Copy of his new novel "Patriots" due to be released next month, and spent a lazy afternoon inhaling it.

In this fictional work, Republicans are thinly disguised as “Constitutionalists” and Democrats as “Nationalists.” Gen. George Pulaski, a maverick moderate conservative war-hero president—think John McCain melded with Mitt Romney—has just been elected to replace a one-term black liberal president, Monroe Williams. The country is mired in economic malaise and a war with drug lords in Mexico. The conservative fundamentalists in the Constitutionalist party turn on the new president when he wants to raise taxes to cover budget shortfalls and pay for the war effort. “If Pulaski doesn’t keep the faith, I say, tear his heart out,” says the publisher of a Constitutionalist magazine. They use every tool at their disposal: corrupt think tanks, a manufactured “grassroots” protest movement, and a cynical conservative cable news channel run by a ruthless megalomaniac who beds his “on-air blondies” while plotting to bring the president to heel. The operatives are not above using private detectives and bankrolled bloggers to engage in blackmail and scandal-mongering.

In other words, Frum has channelled every liberal’s dystopic vision of a vast right-wing conspiracy. And he has infused it with the authenticity of someone who has been there, done that. The book is thick with insider type details, like the ample portions of steak cut into bite-sized pieces and served as “appetizers” at a lavish lobbyists’ reception—because serving steak that requires utensils would violate congressional ethics rules about free meals.

It sometime has a bite of a man shunned and with an axe to grind (just my person take).

Frum told the WSJ he doesn’t share the disdain of many Republicans for Obama, but would not vote for him. “Personally I find him a very sympathetic figure. I like his seriousness of mind." But he adds, “I think he is very, very liberal—more so than Clinton was, and more than he understands about himself.” *cough*

Frum had launched his own website and blog, FrumForum, but since January has moved his writing full-time to Tina Brown’s Daily Beast and Newsweek magazine (that in its self should tell you a lot). He also has a contract with CNN and writes elsewhere, including in the National Post.