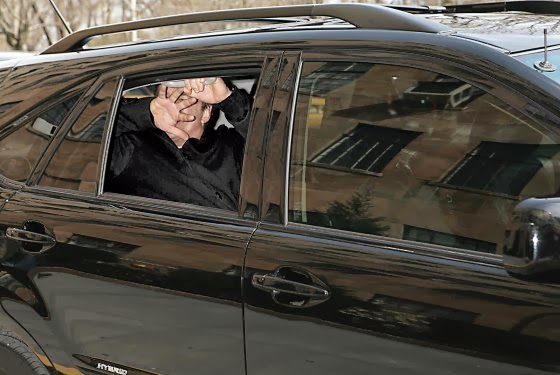 Everybody's favorite liberal loose cannon and angry white guy, Alec Baldwin, who has a thing for assaulting NY paparazzi over the past few years says that he has had enough of New York.

“I just can’t live in New York anymore.  “Everything I hated about L.A. I’m beginning to crave. “L.A. is a place where you live behind a gate, you get in a car, your interaction with the public is minimal,” he explained in the most recent rant. “I used to hate that. But New York has changed.”

Besides whining about being bothered by the great unwashed, most interesting was Baldwin’s vitriol aimed at MSNBC, which pulled the plug on his droning talk show following one of many altercations with a photographers:


"I watched MSNBC, prior to working there, very sporadically. Once I had signed a contract with them, I wanted to see more of what they were about. It turned out to be the same shit all day long. The only difference was who was actually pulling off whatever act they had come up with. Morning Joe was boring. Scarborough is neither eloquent nor funny. And merely cranky doesn’t always work well in the morning. Mika B. is the Margaret Dumont of cable news. I liked Chris Jansing a lot. Very straightforward. I like Lawrence O’Donnell, but he’s too smart to be doing that show. Rachel Maddow is Rachel Maddow, the ultimate wonk/dweeb who got a show, polished it, made it her own.

"Now I loathe and despise the media in a way I did not think possible. I used to engage with the media knowing that some of it would be adversarial, but now it’s superfluous at best and toxic at its worst. If MSNBC went off the air tomorrow, what difference would it make? The problem with everybody on MSNBC is none of them are funny, although that doesn’t prevent them from trying to be."

He blamed network star Rachel Maddow for pushing for his firing, calling her “a phony who doesn’t have the same passion for the truth off-camera that she seems to have on the air.