Least effective U.S. Secretary of State of the past 50 years

Foreign Policy magazine this week announced the results of its 2014 Ivory Tower survey of 1,615 international relations scholars from 1,375 U.S. colleges. The survey quizzed respondents about recent historical events and future policy challenges.  Among the questions ask in the survey: who was the most effective secretary of state over the past 50 years? 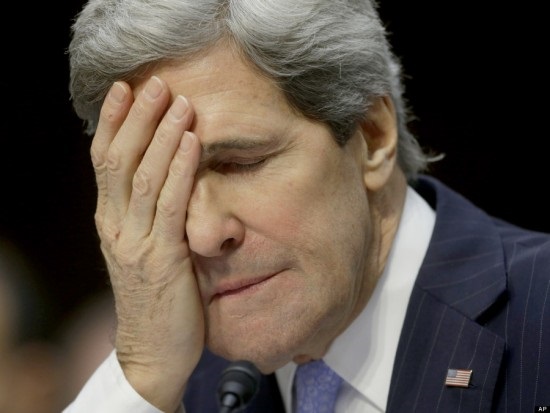 Not good news for for the Earl of Ketchup.


The winner of the polling was Nobel Peace Prize winner Henry A. Kissinger, who was secretary for four years during the Nixon and Ford administrations. Kissinger got 32.21 percent, extraordinary in such a large field.

“Don’t Know” came in a relatively distant second, with 18.32 percent.

James Baker, Secretary of State in the George H. W. Bush administration, who was actually the most effective secretary in the last 50 years, came in third at 17.71 percent, just behind Dr. Know.

Madeleine Albright and Hillary Clinton tied for fourth at 8.70 percent. (no doubt voted high by female scholars for obvious reasons).

And Pulling up the rear, Lawrence Eagleburger came in 12th place with only 0.31 percent.

And dead last, was John Kerry. He got a total of two votes of the 660 scholars who responded.
It can't be very comforting to Sec. Kerry that he polled behind  Eagleburger, who was only secretary of state for six weeks. (insert laugh track here)

And to think, this is the man who democrats put their faith in to defeat George Bush and become the 44th President of the United States......