John Kerry Has His Fill of Middle Finger News Service 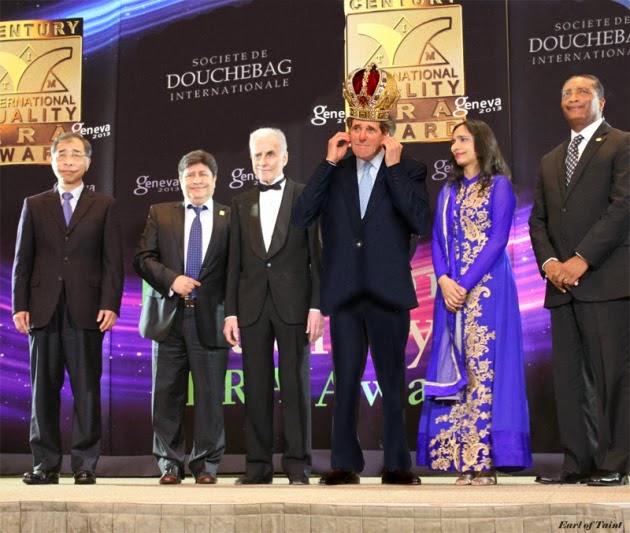 MFNS - Secretary of State John F. Kerry (he fought in Vietnam you know) has called out 'Middle Finger News Service' as a pitiful Unamerican / Uncosmopolitan “satire” outlet and threatened humanitarian annihilation, if we do not shape up.

Below is a transcript of his remarks at the "Societe De Douchebag Internationale" convention yesterday, and I promise you, sh*t  getting real.....


"The illegitimate 'Middle Finger News' editorial regime and its vicious hack collaborators, for too long, have defied the wrath of the International Community.   These despicable hooligans truly are “Sinners in the Hand of an Angry Military-Industrial Complex,” and its about time they started to show accountably for their venomous use of free speech and abuse of the people's Internet.

Their crimes against breadsticks are simply intolerable. It is over 72 hours since either a news post or even a meager, petty, individual comment on MFNS has mentioned the Olive Garden fiasco. How much longer does Our Common Humanity have to wait?"

"I know not with what weapons President Assad has fought with, because we haven't had a chance to think about this one yet. But what I do know is that our war of eternally compassionate and brutally sympathetic attrition with the bitter, hard-boiled Middle Finger News dogmatists and ideological fanatics will be fought with… um, Syrian cooking pots.”

"You know who said that? Yes, that’s right.

No, not Assad, he’s kind of our second-best frenemy right now. I mean, it's getting to the point where he needs us more than we need him. Unacceptable. But kinda acceptable too.  Or is it?

No, not that Indian guy. No, not Einstein either. Someone a bit closer to home. A great man of peace.  I Thought it was pretty obvious who is the Great Emancipator and Man of Eternal Pacific Justice in our time.

Anyway… I've told you what's what, and who our enemies are for the time being…Until we decide (or at least do not decide) otherwise, in light of the purely value free and objective given constraints and opportunities.

Still, the other side of this dilemma, which is equally important, and of equal strategic importance to us all, is that Middle Finger News Service is an eternally radiant beacon of Voltairean irony and satire, carrying the eternal flame of Paine and Jefferson across all the boundless, blooming spaces of the information superhighway…...the sole and sufficient hope in which all meager, starved, and sore thirst seekers of satire may put their trust; and ever abide in the tender bowels of humor, the greatest gift among gods and people.

No, don’t worry, that was technically a malapropism, not a flip-flop as such. Well, I guess it depends on how you look at it.  Nope! Sorry! You're not having that one. No woolly compromises.