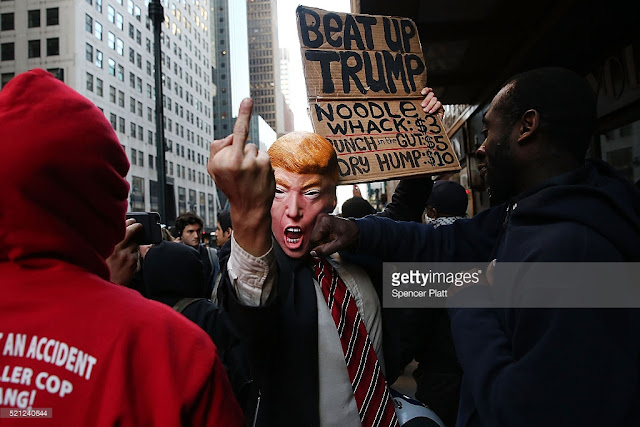 The Huffington Post today published an Op-Ed by a leftist calling for and justifying violence against Trump supporters. One reason? Trump and what he stands for must be stopped by any means necessary. For another, violence sometimes makes good things happen:


Violent resistance matters. Riots can lead to major change (*note the irony of that hyperlink going to a Vox article). It’s not liberal politicians or masses that historians identify as the spark underlying the modern movement for LGBTQ equality. Nor was it a think piece from some smarmy liberal writer. It was the people who took to the streets during the Stonewall Uprising. It was the Watts Rebellion, not the Watts Battle of Ideas, that exposed the enduring systemic neglect, poverty, inequality, and racism faced by that community. Similarly, it was the LA Uprising, not the LA Protests, that led to significant changes in the Los Angeles Police Department. More recently, the Ferguson and Baltimore Uprisings both helped prompt the Justice Department to investigate their corrupt police forces. And since we’re talking about fascism, it’s worth remembering that it wasn’t the election of a moderate centrist (hello, Hillary) or a sanguine protest that stopped its ascent in Europe. It was, primarily, the Russian military, and to a lesser extent the US military; neither of which practiced nonviolence if memory serves. - Read More

Remember this when President Trump gets elected on a law and order platform, positioning himself as the only thing standing between law-abiding Americans and these violent left-wing hysterics. What’s going to happen to these Social Justice Warriors when they find that the general public is not as spineless as college administrators?
© Posted By Diogenes Sarcastica™ on 6/08/2016 05:30:00 PM