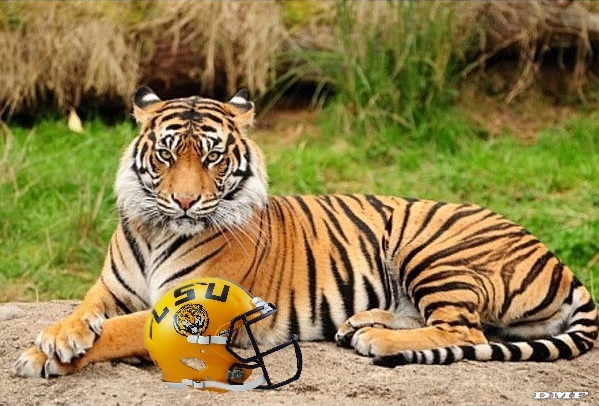 Yes, it's indeed that time of year. It's been 8 long months since the Crimson Tide raised the Golden Trophy in victory. But now there are fresh jerseys, refurbished helmets, new cleats and all new, longer and much improved fake weaves to flow from beneath the helmets. (I hear they give you that extra half-step on your competitor). The Expert Sports Monkeys have picked their top 20, conference champions, National Champs and even the Heisman Trophy winner. And as usual, they will be wrong. But the season is finally here.

At LSU the expectations are high. And believe me, the people of Baton Rouge could use some long-term good news in the form of a  successful season for the Tigers. Since the recruiting class' of 2013-2014, people in the know of college football have pointed to the 2016 season as the year the Tigers would have the experience and pieces in place to make a run back to the top. Some though it came early, last year.  But it was not to be. Key player injuries, confusion in play calling and a trip to Tuscaloosa cost them what should have been a 10+ win season. You can't win championships with a team dominated by freshmen and sophomores lining up against non academic 5th year seniors who should be in the NFL.

But this year, they are no longer the "Young Tigers". Not since 2011 have the Tigers been this loaded. Five of seven players bound for NFL early round draft picks chose to return for their senior year (2 of which are pre-season All- Americans) because they saw the spark of what could be this year.

The early season may hinge on how well the Tiger Defense has adapted to the new 3-4 scheme. Through the 2013 - 2015 seasons under coordinator Dave Aranda, the Wisconsin Badgers statistically had the best defense in the nation. Aranda is now a Tiger, and has inherited a lot more talent then he previously had.  Aranda likes to play pin-the-ears back, aggressive multi-look defense that was the hallmark of past Tiger Championship teams.  With the defensive backfield expected to be one one the best in the league, the mantra this year is "Run if you can, throw at your own risk".

As for the LSU offense, all that needs to be said is that every time #7 touches the ball it will be a violent reminder why he should have at least been invited to New York last December. NUFF' SAID.  If talent and confidence translate to performance on the field, the 2016 Tigers could turn out to be scary team to face. We'll see......

Diogenes Predictions for Week One:

* The SEC teams kicked off the season Thursday night as the SEC East favored #9 Tennessee Vols were man handled and pushed around by the one of the great defensive units in college football history, The Appalachian State Mountaineers. The Vols trailed for all but 10 mins of the 4th quarter, but squeaked out a win in overtime. If I was Tennessee coach Butch Jones, I'd start drinking. Heavily!

LSU vs Wisconsin: (2:30PM CT - ABC)
The Tigers travel to historic Lambeau Field to meet the Big 10 Wisconsin Badgers, and attempt to extend their NCAA record to 54 straight non-conference wins. The Badgers are a big, physical, run it down your throat team and will be a good test of the new Tiger run defense. This should be a good game, with Wisconsin out to prove they are as good as anyone in the Big 10, with or without Dave Aranda. The Tigers are favored and plan on leaving their SEC calling card as a reminder where the toughest conference in college football resides.

I'm wondering what #7 will be feeling running the same field another great LSU running back, Jim Taylor, did years ago, carrying a few over the goal line for Coach Lombardy?

Alabama vs USC: (7:00PM CT - ABC)
The USC Trojans travel to Jerry's World in Arlington Texas to face the retooled Crimson Tide as they begin the defense of their National Championship. This will be the first meeting of the teams in over thirty years. I know very little about USC, other then they are said to be on the rise as far as the PAC 12 goes. Nothing would raise their stock more than knocking off the #1 ranked defending National Champions on national TV...... ain't gonna happen.

What will happen is USC will get a swift and thorough lesson on how we play football down in God's Country.

Since no teams have actually played yet, the above predictions are based solely on what I know about the teams and personal pre-season conversations with smart people.  I said it, so it is so! (All future predictions are subject to my tingly girlie intuition parts) But, Diogenes did get out and dust off her sometime reliable crystal ball to look long term for a few predictions.  Here's what It told me:

1)  Leonard Fournette WILL NOT win the Heisman Trophy . But, he will end his career as a Tiger by breaking all of Kevin Faulk's rushing records to become the Greatest Running back in LSU history, and #2 all-time career rushing leader in SEC History.

2)  Alabama and LSU will both finish the regular season 11-1, both with one conference loss. The winner of the Nov. 5th meeting in Tiger Stadium will make the trip to Atlanta and defeat the Georgia Bulldogs for the SEC title.