It Should Come As No Surprise The DNC Picked This Guy

The Democrat National Committee has elected to head their little Party of resistance and mouth breathing leftist by choosing Thomas Perez, former Obama Administration  Secretary of Labor.  Yeah, the same Labor Dept. that gave us phony job numbers before the 2012 election, and almost unbelievable fairytale numbers just in time for the 2014 mid-terms. Imagine that!

Below is my post from March 2013 when Mr. Perez was up for conformation for the Labor Dept. It says all that needs to be said about Mr. Perez: it need not be re-written. 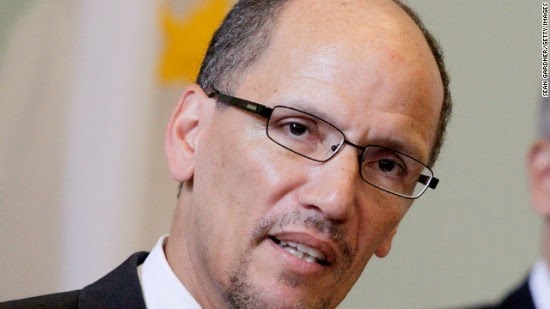 Radical leftist lawyer Perez is to be the next Secretary Of Labor.  This douche is now an assistant attorney general at the U.S. Department of Justice. Yeah, Eric Holder's D.O.J. Here's a little background on Mr. Perez:
from The American Thinker

More about the Panther case and an interesting recently released report on other race based justice cases can be read at PJ Media:

Perez, like so many Obama administration officials, believes that America is a seething hotbed of "Islamophobia," filled with ignorant racist rubes who irrationally fear the Muslim religion. He has worked with hardcore Islamist groups such as the terrorist-linked Islamic Society of North America and applauded Islamists for lobbying against airline security measures...." Read More

Islamic radical friendly, advocate for illegals, doesn't believe in equal protection under the law for all races, educated in the nest of leftist worms called Harvard Law.......yeah, he should fit right in and be in a more powerful cabinet position in which to influence the rotting away from within agenda for America that is well underway.